Twitch
GR View Places
GR View Places
The Super Nintendo version of Sim City was the first console game in the Sim City Series, it was also apparently a launch title for the system. I have to admit though I never saw it in the early days, in fact I think I got it very late in the day.   It was developed by Nintendo EAD under license from Maxis and published by Nintendo (in 1990). I think the fact that Nintendo worked on it themselves shines through into the final product. This is far from a hasty cash in conversion, its a very specialized version of the game tailored towards SNES owners and it shows pretty much straight away, I know this is giving the game away early but I have to admit that this is actually my favourate version of Sim City. I fell in love with it from more or less the instant I played it.
The gameplay is similar to the PC version, but every step possible seems to have been made in order to make it easily playable with a jupad, there are also more buildings and scenarios added to the game so in a way you can consider this a sort of Sim City 1.5. There are lots of other little style based changes which the average user would not notice unless they have played both the SNES and PC versions, one example is that the buildings  present in the SNES version resemble those in Japan  as apposed to the typical North America styled ones in the PC version.
The best thing about this for me in comparison to the PC version is the adviser they have added to the game who goes by the name Dr. Wright, he is supposed to be a cartoon parody of Will Wright the creator of the Simcity Series, obviously I know that now but as a kid I never realized that, I just took him as a new cutesy fun Nintendo character and I actually wondered if he would ever turn up in anything else. He is basically there to offer you advice and to tell you things such as the population growth of your city. To add to the Nintendo related flavor Nintendo also sprinkled one of two little touches in there  the Godzilla attacks from the PC have been replaced with Bowser attacks and if you can reach a particularly high level of  growth then there is an unlock-able Mario Statue that you can place in your city . 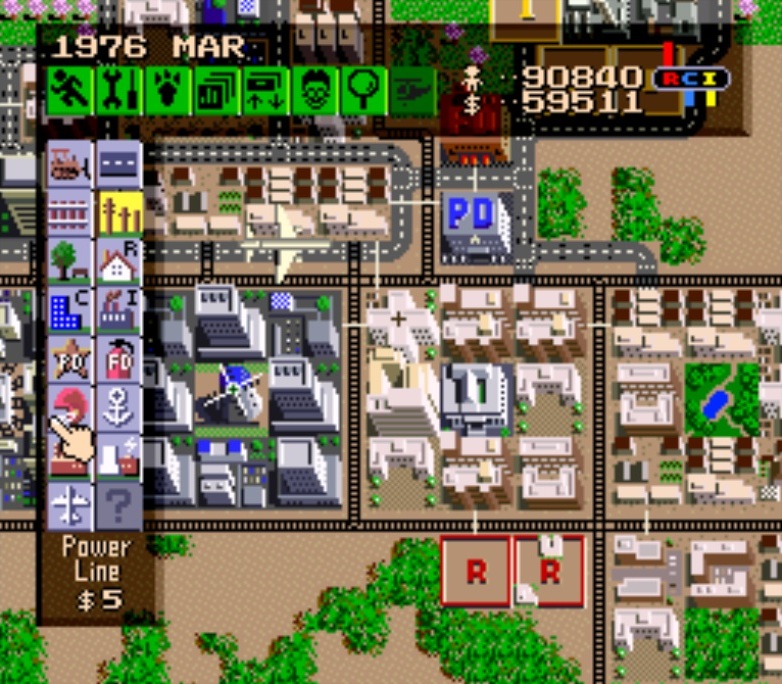 The graphics are functional but cute, the music is a little twee but its also catchy, I have the main music from this game on my MP3 player and actually find it quiet relaxing. For those of you who haven’t played this the whole point of the game is basically to make a thriving city which grows and grows in size, but how you do this and what tax rate you set, how you choose to lay out the city all of these things are left to you. This is great as you can build a giant city have fun with it and then decide to do it all again this time setting it up in a completely different way. There are lots of different maps, you essentially put a number in and it decides a map for you, you then get to say Yes or No to this map.
In some ways this game was the 90’s equivalent of console Minecraft. I mean this in the way that you would spend your time building an impressive world which you could then show off to your friends. This is and was a great game if you had friends to share it with as you will all use the same basic game, the same basic framework but yet end up with a totally different city, to an extent your city is a reflection of yourself. One of the best things about the game was that there was very little like this on the system. If you were sick of all of the platformers, one on one beat em ups, sports games etc then this was something different something original, and for that I think it deserves a place in everyone’s SNES collection. This is pretty much the only PC to SNES conversion where I can say with utter confidence that I think the Super Nintendo version is the superior version. I am going to give it a 10 out of 10  that is how deep my love for this game is, I don’t think there is anything else really like it and I think that it is almost infinitely re-playable.
If you want to buy this game then it will cost you about £8 for a pal cart. Which I think is an absolutely brilliant price considering the fact that the enjoyment you can get out of it can be practically limitless.