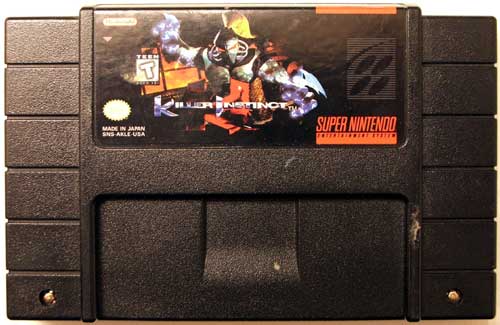 I wasn’t really sure what I was going to review as my 41st SNES review…several games nearly made there way into the SNES to instead be pulled away at the last instant. I have tried to keep things as messed up as possible for reasons of variety and surprise, so I have jumped from games launched early in the machines life then to late games and backwards and forwards pinballing all over the place. Sometimes though there has been a degree of method behind my madness and this is the case here. Today I am going to talk about Killer instinct the reason being that I have laid a small subtle amount of groundwork for this, first I made sure that I had already talked about Street Fighter 2 the world warrior because its the ground stick every other fighting game ended up  judged against back in the day and I also made sure to talk about Super Battletoads.
You might remember that I said that in the early days of the SNES Rare released very little, so really they jumped straight from Battletoads in Battlemaniacs to this game and Donkey Kong country. These games were made using the expensive workstations they had funneled all of there NES game profits in to.
So Killer Instinct is a fighting game developed by Rare.  Published by Midway and Nintendo, it was originally released as an arcade game during the summer of 1994. I remember seeing this in the arcades it caused a massive fuss, people flocked to it. When it was announced that it would be coming to a home system the first thing everyone I knew presumed was that it would be coming to some kind of ”next gen” system or that it would be a massively cut down shadow of its former self. So the  following year when it was ported to the SNES every ones jaws collectively hit the floor, there was cheering shouting and the usual unfortunate fan boy prodding of Megadrive/Genesis owners, some of which tried to counter the argument for format superiority with the fact that Eternal Champions: Challenge from the Dark Side was exclusive to the mega CD.
Some people would look at or play Killer Instinct and look at it from the point of view of it being a street fighter or mortal kombat clone and sure it has a little in common with both of these titles, if anything I would say it is kind of the middle point between the two in terms of style and playability. Killer Instinct was far from just a clone though, it had graphics the likes of which had never been seen in a home console game but there was more to it than that though it actually has a few game-play elements that were unique to fighting games at the time of its release some of which have been adapted by other games. (Similar ideas might have been tried in other games but KI is the one that made them well known).
Instead of fighting enemies in best-of-three rounds bouts, each player has two life bars. The player that depletes both of the other player’s life bars first wins. The game also introduced “auto-seconds”, which allows players to press a certain sequence of buttons to make characters automatically perform combos on opponents. Also featured in the game are “combo breakers”; special moves that can interrupt combos, for anyone who has been playing a fighting game and found themselves stuck in a life bar smashing sequence of hits that they just cant get away from combo breakers are and were a god send.

The graphics at the time were amazing, they haven’t aged brilliantly though, street fighter 2 has definitely aged better in this regard, but the sound in this game is out of this world, and not just out of this world in terms of games music it is actually brilliant music in its own right which probably explains one of the reasons that the game originally came with a CD called Killer Cuts featuring its music. To this day I still have a track from this disc on my phone so that I can listen to it when I travel.
I think that the game still more than has the quality of gameplay needed to drag you in, sure people will say there is only 10 characters and that once you have finished it with all of them there is not a lot to do, and yes this is kind of true but if you have two pads and a friend or two this game can last forever. You can get along playing it in a button mashing manner but if you want to see all that the game has to offer then it takes a lot of time and skill to see everything all of the combos, all of the finishers. Yes there is only 10 characters but there is no palette swapping they are all fully independent characters with there own move sets and fighting styles and each one of them has a story behind them.
Even given all of the years that have gone past I find myself needing to give this game a high score… I think I need to give this game an 8, its just that good. I have two copies of this, one is American and the other is English, they are both carts only unfortunately.. I wish I had a complete copy just so I still had the Killer Cuts CD.. last time I had my hands on a copy of the CD was at my brothers, he let me rip the disc and listen to it, but then he put it back in his car so he could listen to it while driving, unfortunately he was living in a rough area and someone set his car alight and well the car the CD and everything else in it turned in to a burned and melted wreckage.
If you want a copy of this game will only cost you around the £6 to £10 mark for a cart only, you can get a boxed copy for around £25 to £35 unfortunately very few of them seem to still have the Killer cuts disc in them.
Killer Instinct of course was followed by a sequel, the 1996 arcade game Killer Instinct 2, there are rumors that a SNES port of this was finished but never released, this may be true as other games were dropped towards the end of the machines life for fear they wouldn’t sell with different versions going on to become N64 games as well. For examplethe original Starfox 2 was left pretty much finished but unreleased at with some of the ideas from it becoming taken to help make+ Lylat Wars, and Killer instinct 2 was released on the N64 with the title Killer Instinct Gold). The Killer Instinct brand has been revivived by Microsoft who now own rare but they had used an other studio Double Helix to make the game, with apparently a tiny bit of advice and ideas from Rare. It kills me to think that KI is continuing to exist but Rare are busy making Kinect games and hats for Avatars.