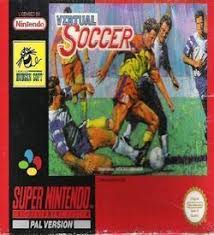 I have mentioned before that when it comes to football games back in the SNES days there was a wide selection as opposed to today’s simple choice of FIFA or PES.

So I thought that it was about time I looked at another one, J.League Super Soccer, which was made by Hudson Soft. You’ll most likely have heard of Hudson due to its most popular series of games Bomberman or due to the fact that they made the first eight Mario Party games for Nintendo. (On a side note Hudson Soft ceased to exist as a company in March 2012 and was merged with Konami Digital Entertainment, although Konami intend to carry on using the Hudson name.)

The first thing I am going to say about J.League Super Soccer is it has a wonderful intro. But the truth is you cant describe what this game does when left to its own devices as an intro there is no story. What we really have here is an arcade attract mode. Basically some lively football music with a nice chant running through it is played while the game goes from showing you a bit of in game footage, to pictures of clapping fans, to the game’s name and then back to small what can best be described as football comic strip pictures. It almost reminds me of one of those brilliant Amiga software demonstration discs you used to get, the type which would show you pictures graphics and music just for the purposes of entertainment. If you can’t tell, this is something I love about this game. 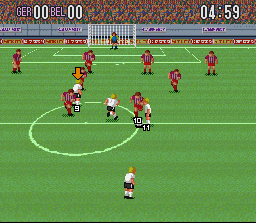 Originally I didn’t realise what I had been playing was a common game, which came out in the UK with some minor alterations. In fact you might have heard of it, it was called Virtual Soccer. Basically all they did was put in the English language and change the teams from Japanese first division teams to national teams. In the process of buying games for this series of reviews I very nearly went and bought Virtual Soccer which would have meant I had wasted my money buying the same game twice. Something I did notice was that the game has a speed option and you can play it at normal speed or fast speed, but even normal speed is quite fast and this is something I like. You can choose two views to play from. I chose the overhead view which made it look like a game I am sure most of you will have heard of – Kick Off.

I found it hard to shoot but then I am usually bad at these kinds of games. Passing didn’t seem to go quite where I wanted it to go, but unlike the last football game I played the ref at least seemed fair calling for yellow cards when I was fouled as well as when I fouled the computer. When you score there is the satisfying “Goallll!” I wanted to hear in the last game, but still I don’t think enough fuss is made for my taste. You can see the little man is celebrating but I still want to see it closer up. I want to see players punching the air or hugging each other in a cartoon panel or something.

I am glad this game exists because I love having a wide variety of choice and there are things I really like about this game, the presentation, the speed the “Goallll!” soundbite after you score. I guess I would give this game a five out of 10, despite it giving me some of the things I said I wanted to see in a football game during my last football game review it was a step forward in some areas and two steps backwards in others.

Fortunately for anyone who would like to try this game the English PAL cart can be got from eBay for about £3 including postage. I paid £2.25 for the Japanese version including postage. This does raise an interesting point about importing though, the fact that games can change from region to region so sometimes some research is useful to make sure your not buying an altered version of something you already own. But I guess I am still searching for my perfect 16-bit football game.