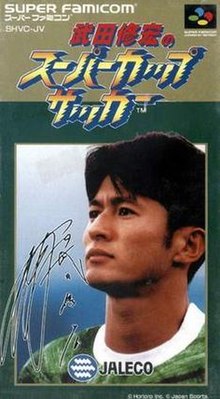 I have plainly admitted on most days it has been a case of stick my hand in the box, and providing the game is not the same genre as one I have played in the past few days, I play it and then talk about it.

I did things a little bit differently this time, I actually picked this game out. I didn’t pick it out because of the game itself, I picked it out because it represented something I want to talk about.

Nowadays we live in a very much ‘Coke and Pepsi’ world when it comes to football games. There is FIFA and there is PES and more often than not that’s as much choice as you have – one or the other. Back in the days of the SNES there was a lot more choice than that. Sure, there was FIFA and there was International Superstar Soccer (the game which eventually became PES) but there was also a lot of other games. Loads of companies would try their hand at the football genre and this is something I miss. Choice is a good thing and the more options one has when it comes to games the better I feel it is.

So today I have been playing Super Goal! 2 (or as it’s known in Japan Takeda Nobuhiro no Super Cup Soccer) by Tose which was published by Jaleco. The first Super Goal made it to these shores but the second one was only brought out in Japan and the US as far as I know (there was at least one further sequel in Japan).

Now in my hour or so of playing I learned a few things, one being it ain’t so bad. Sure the computer seemed to get away with fouling me a lot even in the penalty box without it giving me a free kick or penalty every time, apart from once. I also found it pretty hard to score goals but then I am not the best at these sort of games. The important part is I got into it, I was enjoying myself and never once did I stop and say ‘boy. don’t I wish I was playing FIFA’. To all intents and purposes this game provided a perfectly entertaining spot of football. There were all the options you’d expect – exhibition, season, penalty practice. You can pick whichever country you want to be and you can choose the formation you play in. Of the pad’s four face buttons, one seems to be a hard shot, one a soft, one a high shot and the other passes to whichever player has pass flashing above his head.

Back in the day this game seemed to get a lot of scores in the range of six to seven. Nintendo Power gave it 3.1 out of five. I tend to agree with this basic score range. What do I actually want from a football game on the SNES, you might ask? Well, I would like it to be a little easier to score but more than anything what I really wanted was a little piazazz, a little bit of flair. I want to hear “GOALLLL” shouted when someone scores. I want to see a close-up of a player screaming “Yes” or punching the air. I suppose that’s one of the problems with having a lot of options, it makes you want more. Nowadays when the only choice is largely FIFA or PES (unless you want a wacky game like Super Mario Strikers, etc) you don’t tend to ask for as much. Maybe that’s why both of them can come out every year and ask for another £40 with just a handful of new bells and whistles added to the previous year’s model.

I got this game in a bundle of Japanese carts, I think it was five carts for £10, and to be honest looking on eBay you can get this game Japanese for £3.60 including postage. If you want a US copy it will cost you a little more, around £10.