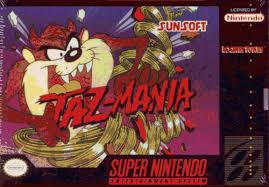 You can’t talk for long about the SNES without mentioning the Mega Drive. Most people when I was young would have one or the other, but I was one of the exceptions to this rule.

I got a Mega Drive at first and then later I got a SNES. I like to think this made me less biased, as I was willing to see the strengths of both machines, willing to recognise good games on both platforms.

The SNES game I’ve played to review was Taz-Mania. The game featuring Taz the Tasmanian devil (yes, the one from Warner Bros.’ Bugs Bunny cartoons and later his own show, Taz-Mania).

This was one of the cases where games bearing the same name came out for both SNES and Mega Drive more or less around the same sort of time, but were actually totally different games developed by different studios. Sometimes this turned out for the best because it meant both machines got games tailored to their own strengths as opposed to a game being made for one then ported to the other, or one simply being made taking the limitations of both platforms in to account. Taz-Mania on the Mega Drive was a 2D side-scrolling platform/adventure game which was developed by Recreational Brainware and published by SEGA. Taz-Mania on the SNES was a very different beast, developed by Visual Concepts and published by Sunsoft.

In each level of SNES Taz-Mania Taz must race against time to grab and eat a set number of kiwi birds, a number which if he does not manage to consume will see you lose. Enemies will attempt to stop Taz by running over him or bumping into him. In all of the levels you run up the road in a fashion a little bit like a car game, you run, you jump and you spin in an attempt to catch up to the birds needed while avoiding all perils. The graphics are nice and bright with a big Taz sprite who is full of character, this instantly makes you want to like the game but once you’ve played for a while you find that it all feels rather soulless. There are a lot of reasons for this, I think one is the fact that the controls feel very floaty – I never felt like I was properly in control of Taz. Whether or not I managed to catch the birds seemed to be based more on luck than any level of skill I did or did not possess. Any game which makes you feel like you’re winning or loosing based on your level of luck is off to a bad start because its only going to bore you even quicker. Add to this the fact that every level in the game is the same – they are all just running up the road looking for birds. Sure, more gets thrown in – rivers to jump, extra enemies – but it all still feels the same and it all feels like it relies on luck. 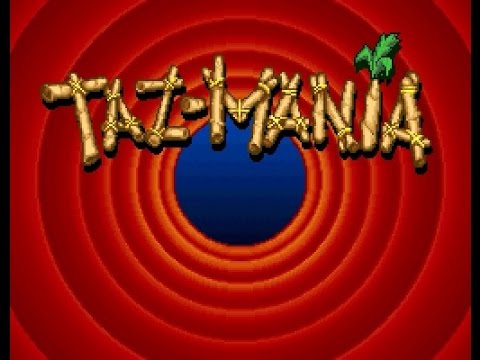 Mega Drive owners got a platform game. It wasn’t the best platform game in the world, but it scored very highly back in the day. I am talking around 80% but in retrospect I am not sure that it is in fact that good, to me its more of a 75% kind of game, good but forgettable, but still at the time it seemed so much better than the SNES game.

You can see why Sunsoft avoided the platformer route and went for something original, something different. It was a brave decision but one that I just don’t think paid off. If this bird eating racing had served as just one style of play in the game, or had been an almost Sonic the Hedgehog 2-style bonus level interspersed with platforming it would have been a lot better.

If I had to give SNES Taz-Mania a score I guess it would have to be three out of 10. It is perfectly playable, it’s just not very fun and it doesn’t have much to bring you back to it. Sure, some people would argue that it deserves more because it has good graphics and technically there is not enough wrong for it to deserve a score this low, but let’s face it, games are supposed to be fun. They’re supposed to draw you in and make you want to spend your time on them and if they fail to do this then they just fail in general.

I paid £5 for an NTSC cart of this game. You can get either a UK or US one usually for around £8. Heck, I’ve seen a fully boxed PAL copy online for £13 before. I can’t recommend anyone spend anywhere near £8 for it though to be fair. It’s not how bad this is, it’s how good some of the other things you could spend your cash on are. If you have a Mega Drive you can get a boxed PAL copy of Mega Drive Taz-Mania starting from £5 and this would be cash much better spent.