So you have a game which is basically a vehicle for a real life star, but you find out that he is only a star in your country, and no one else knows who he is, so what do you do?

This is what happened to Serizawa Nobuo no Birdie Try, a Japanese Super Famicom game staring Japanese professional golfer Nobuo Serizawa. He was replaced with Eagle the robot and the game got the name Mecarobot Golf because well robot plus anything equals better, doesn’t it?

The whole robot thing is a gimmick. And not a good gimmick, not one layered with reasoning but a rubbish palate swap of an idea. Buying this game I had another game in mind which was the Neo Geo game Super Baseball 2020, a game in which you have whole teams of robots playing baseball together with excellent presentation and gameplay. 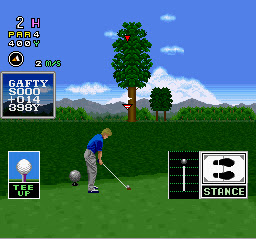 Nothing is actually wrong with Mecarobot Golf it controls in a similar way to most golf games with pressing buttons at the right time in accordance to a meter. There are a decent number of holes but the robot thing serves no purpose at all. You don’t even play as a robot – you’re a human trying to beat the robot. I have read notes that there is some story to this game that in the world in which this game exists humanoid robots are considered to be second-class citizens, their rights are limited and one of the things they are not allowed to do is participate in golfing tournaments. So a rich benefactor purchases Eagle and builds all of the golf courses for him to play against the robot on. This story must have just been manual fodder though, as I never got any of that from playing it. All I got was I am playing as a boring generic man against a poor transformer sprite for no real reason at all.

Other than the weirdness of its birth there is nothing to much I can say about the game. The music’s fine, the graphics are decent if not amazing and the game plays fine. It’s just another average five out of 10 game – don’t get drawn in by the robots.

I spent £3 on getting my cart and that includes postage. It doesn’t come up for sale that much over here as its a US import that never saw release here, and in Japan it came out but with the title I have given above. If you do go for it on the rare occasions it surfaces it never seems to go above £10. Heck after buying mine I saw a boxed copy that was a bit beaten and battered for £8.