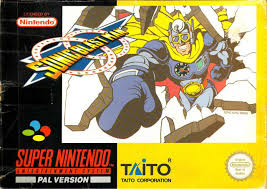 It’s funny how sometimes all you need to see is a company’s name on a box and it’s enough to get you excited. In fact it’s sometimes enough to make you buy something on the spot with no real research.

Back in the PlayStation days I remember a lot of people would feel totally safe in just picking up anything with the Square logo on it. For me a company who I have always rather liked is Taito. They made a lot of great games back in the day, so the sight of their name on a cart is cause for a hopeful smile.

Some of you who used to go to the arcades as kids might have heard of the name Sonic Blast Man. It was the name of a pretty sizeable arcade cabinet which came with boxing gloves and a punching pad. You would play the game by trying to punch the pad as hard as you could when it told you to. I remember it started with you punching a thug who was trying to assault a lady and if you got to the end you were trying to punch a meteorite away before it could strike the Earth.

I loved this game I would hunt high and low for it in arcades up and down the coast. Apparently, in March 1995 Taito recalled Sonic Blast Man machines due to reports that some players had sustained injuries while playing the game. Although I have to cry BS on this one, you wore gloves and you punched a well padded sensor. Sure I have seen people injure themselves in connection to the Sonic Blast Man machine but these were idiots who were punching it bare-handed and had no real idea of how to punch it or worse. I once saw a guy try to run and fly kick the pad in an arcade, he miss judged it and landed on a very painful part of his body as it made contact with the corner of an old Operation Wolf machine. Yet in the US, Taito had to pay a fine of $50,000 for failing to disclose these “injuries”.

When I heard as a kid there was going to be a SNES verion of Sonic Blast Man my mind went nuts. How could they turn it into a SNES game? It would cost the earth if it came with boxing gloves and a usable sensor pad, plus I could imagine it would be a PR nightmare as one child punched another child while missing the sensor or punched the TV. (What I saw happening in my mind was basically what we all saw upon the Wii’s release with all of the remote related accidents, newspaper stories, etc.) I kind of expected them to go down the old joystick waggling sports games path, where you’d have to bang buttons to fill up a meter or something but then I stopped and thought that would be awful. The arcade game was very short and was fun purely because of the novelty factor. Five levels of banging joypad buttons to fill a meter to punch something would have been an awful Idea for a £40 cartridge based home game.

The SNES version is actually a side-scrolling beat ’em up. Sonic Blastman’s mission is still to save the Earth, but this time it is from all manner of street gangs, terrorists, aliens and robots. The fight starts on a construction site, but you’re soon moving from place to place and it’s nicely varied for a game of its type. 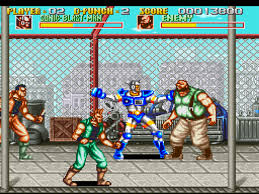 One minus point is the game is only a one-player game much like the original Final Fight was on the SNES. There is only one character as well Sonic Blastman himself which feels a little limiting. As in all scrolling beat ’em ups the game consists of defeating the enemies on the screen before continuing walking to the right to face more until you complete the stage. Sonic Blastman can do all of the usual moves for a game of this type. He can punch, jump, and grab a hold of enemies. When he approaches his enemies, he is able to grab them. From here he can shake them and throw them, or he can unleash a series of rapid punches, depending upon the direction you hold on your joypad.

The bonus levels are an adaptation of the arcade version of the game which is a neat little touch for fans. Obviously they have been converted to be played with your fingers instead of your fists. They’re not bad, though I am still glad they didn’t use them for the basis of a whole game.

The best thing about the game’s graphics are the large sprites. They are big and colourful and will remind you of arcade and Neo Geo games to an extent. The backgrounds are more or less what you expect to see in a background on a city neighborhood, factory and sewer, so they’re functional but not thrilling. But I would argue that as you get further through the game they become more interesting and seem to have more little details hidden here and there.

The music sounds like some kind of fusion of jazz and elevator music but I kind of like it and I think it suits the game well. The sound effects are pretty decent and give it a good comic book feel. You hear Blastman say little soundbites like  “Take that!”. Overall, I think it works.

I would say this is one of the better scrolling beat ’em ups on the system. Sure a two-player mode would be nice and its absence, along with a few other little things, stop me from calling this game perfect. But for me its a good eight out of 10. I think thanks to the big sprites and the simple but fun gameplay this game has aged a lot better than some of the stuff I have been playing. Having a go now I enjoyed it as much as back then.

The game came out in all regions but I have never seen a PAL copy in the flesh in my life, neither now nor back when released. My copy is a Japanese cartridge which I have had since I was young, I am not sure where I got it, I just remember being very excited to get it. Looking around you might be able to grab a Japanese copy for between £10 to £25 if you’re lucky, but every time I have seen an US copy its been ridiculous money like £60 or more, and I am still to see a PAL copy for sale.