I’m not sure how many of you will have heard of Wing Commander. It’s a long running franchise which started out on PC which was then ported to various systems including the SNES, hence me talking about it.

Wing Commander can basically be called a space combat simulation. It wasn’t the first game of its type really but it was unique with its branching mission tree, complex characters and attempt at a cinematic-style story. You start as a rookie pilot aboard the Tiger’s Claw. Before you start blowing stuff up you get to walk around the ship, talk to other pilots, talk to the bartender, etc. There is a lot of stuff there purely to try and make your adventure seem real. For example you can enter the barracks were you will see other pilots sleeping, you will see and hear water dripping into a bucket on the floor and you can open your locker to see your shirt and see what rank you currently are and what medals you have. 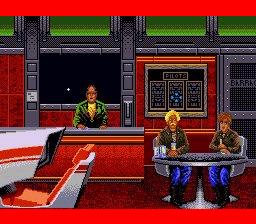 Once you visit the briefing room, that’s when things really start. First you attend your briefing where you’re told what your mission will entail and who your co-pilot will be. This is all done with a mix of text, graphics and animation. Once this is over you get to see animation of you running to your ship in your gear with exciting music playing to get you pumped up ready for battle. You start out heading to check points to investigate them and its not long until you meet the vicious feline Kilrathi. In the first mission you’ll have to fly through an asteroid belt and destroy several small lots of Kilrathi before making your way back to your base ship. The best part is if you die you get to watch your own funeral which contains more animation and text than some games bother with for an ending when you’ve completed the whole game and attained everything possible.

I found that the game works quite well at drawing you in to the plot, making you want to see how the story unfolds, and in a very short space of time you begin to form opinions on the other pilots. You forget that they’re all drawings with AI attached and begin to go: “Bossman is cool but I cant stand that Iceman”. With the fact that there is a chalk board on which you can check your kills against other pilots kills it can become quite competitive. There are times that you can almost forget you’re on a game you will get so into it.

The downsides of the game are in my opinion so few and so slight that it is hard to pick real fault, there are more things you can do than there are controls on a SNES pad, but they got around this by means of tricks where you hold one button while pressing another to do something totally different from what that button would normally do.

This game must have done quiet well on the SNES in the day, maybe because there wasn’t a lot of stuff like it. It did so well that a PC expansion pack was turned in to a second Wing Commander SNES game (Wing Commander: The Secret Missions) and Wing Commander II: Vengeance of the Kilrathi was ported to the SNES (but was never released due to financial projections and a drop in SNES sales by the time it was finished, unfortunately). The sad thing is that the original Wing Commander on SNES had been handled by Mindscape on behalf of Origin and what happened was that it tried its best to recreate the PC game on a SNES. Origin handled the second one itself and apparently went to great lengths to tailor it to the SNES to build it from the ground up as a version that would best appeal to Nintendo players. 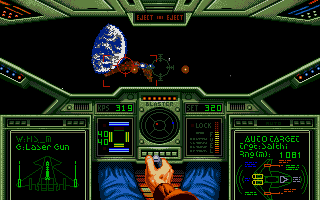 I would rate Wing Commander as a solid eight out of 10. I have owned my copy since I was young and it was the start of  a brilliant adventure, I happily brought Wing Commander: The Secret Missions and then when I found out that Wing Commander III: Heart of the Tiger was coming to PlayStation and had Mark Hamill of Star Wars fame in it I nearly exploded. I had a look online at prices for this game and you can get the PAL version for like £10, and sometimes it is even boxed for that price, so really you can’t go wrong. The only possible thing worth pointing out is that you can get the PlayStation Wing Commander III complete for the same price and as this is a bit more advanced if you own a PlayStation you might decide that III is in fact a better starting point for you. All of the Wing Commander games are basically linked but they all tell more or less self contained stories so there is no real issue with dipping in to the series at any point.

Back in the SNES’ day there were so many platformers, so many beat ’em ups and so many sports games the real beauty of Wing Commander was and still is that there is so very little on this platform like it, sure we have faster arcade style stuff like Star Fox and then there are the first-person shoot ’em ups like R-Type, but actual tactical space combat like this is not really one of the machine’s big selling points so it makes it stand out all the more.