A few years ago I thought I would set myself an interesting little challenge. I was  going to play 150 SNES games in 150 days – one a day.

I wasn’t going to try and to complete them all but I wanted to play enough of each title so that I could give each and every one a nice little review. I figured it would be challenging, but at the time I found myself unemployed and was trying to find things to do which would keep me sane while I tried my best to get a job.

Unfortunately it was not all that long before I actually failed the challenge. Partly this was down to the fact that I got a new job and found it hard to find time for playing games as much, I then lost my new job because while I was still in my trial period they decided to make cutbacks.

After this I sat around feeling sorry for myself for a while, found another new job, and then my partner of six years left me and I just didn’t feel much like doing anything at all.

Now, as pretty much anyone who does a long project will learn, it’s hard to set yourself goals which have no room in them for flexibility – especially when life kicks you square in the guts. I found myself at a crossroads where I could do one of several things. I could try and get back on the horse and go back into the project at full tilt boogie, I could give up completely or I could slow down and take my time. I choose the latter, and as a result I have continued playing SNES games but at a slower pace.

There have been many occasions during my life where I have had to deal with mental health issues and to a degree they have come in to play during this project. Both in terms of slowing things down, but also at times talking about some of these games and their place and effect on my life has proved to some degree therapeutic. Unfortunately I have taken such a degree of time with this project that some of the places it originally started have since shut down. The host for my original blog shut down, and two forums who supported me have also come and gone (one of them being SONM). So I wanted to bring this project to a new place, I wanted to bring it to GRview in the hope that I will both see it through to the end with everyone’s support but also so I can repost and look back on everything I have done so far refine and add to it. I would like this chance to thank those who have previously followed my work but also to welcome those who are going to be reading these reviews for the first time.

So lets get down to business The whole idea is for me to play and review 150 SNES games using both real carts and real hardware. I own both a SNES mini and an Everdrive and although I tinker with them and talk about them everything I review will be reviewed on a real SNES using a real cartridge.

When I started the project I owned 130 carts and intended to buy the other 20 along the way, this is something I have done. In fact, I have probably grabbed a whole bunch more than that. I do appreciate recommendations and know certain people probably want to see certain reviews but I am a man with a budget so to speak, so if a game is worth an absolute pile of money I wont be reviewing it. I do use carts from all regions but I try to let people know what particular region I have used, so if I do not mention it then you can assume that review is speaking about the PAL version.  As for my review SNES, I mostly use a European model I have converted to run at 60hz although from time to time I will use a regular PAL machine either due to issues with the games being run at 60hz or for the purpose of comparison.

I have to admit that my reviews can go off in all kinds of directions, sometimes I will compare a game to its Mega Drive counterpart, sometimes I will give historical information on the publisher or developer and sometimes I will end up just talking about the game’s place in my own life and my own experiences. I will always try to give the game a score out of 10, and try to say what I think you should look to pay for them. You might find some of my data to be a little outdated when I say for example a game is regularly available for under £10 but all I can say in response to this is that it was true to the best of my knowledge when the review was originally written. I am always open to questions and look if you don’t agree with me don’t worry these are just my own opinions if you love a game you love it never let anyone change that for you.

I started this project playing Hook, the game was made for the SNES by Sony Imagesoft (later to be known as Sony Computer Entertainment). They took the basic plot of the film, and then went off in their own direction. Hook the video game only shares a very basic level of plot with Hook the movie

Basically Peter Pan grew up had kids and became a chubby businessman forgetting all about Neverland. Captain Hook kidnaps Peter’s two children, Maggie and Jack, and holds them hostage. So Tink the fairy fetches Pan and carries him to Neverland. In the film there is a whole big thing of Peter becoming the pan again but in the game Tink sprinkles him with fairy dust and bang he is in green tights ready to go. The first level is basically Pan proving he is the pan to the lost boys by kicking their ass and from there on in he is kicking the arse of anything he can reach while making tricky jumps and avoiding enemies through level after level. 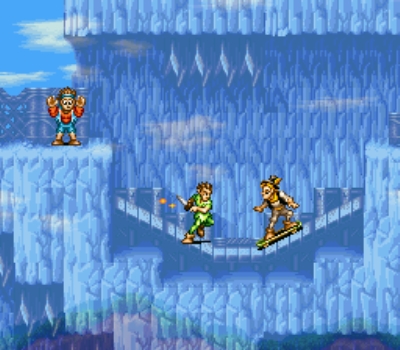 The game is basically your standard 2D platform game but it’s a good one, not one of those hastily thrown together cash-ins which is surprising really with it being a movie tie-in. The levels are challenging and well designed. The graphics, although not stunning, suit the game and are filled with nice little touches. Peter’s hair and clothes blowing in the wind being one example. The character of Pan kind of does look like a cartoon Robin Williams even though they apparently didn’t have the rights to peoples’ likenesses, everyone kind of looks like a simple anime inspired version of their real life counterpart. 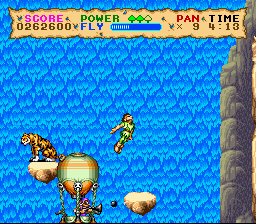 The film had a John Williams’ orchestral soundtrack and most of this seems to have been converted into digitised 16 bit versions which really adds to the feeling that this is a quality production. I won’t say that Hook is perfect though. There are some issues with its difficulty balance. As a game intended for kids it is just too hard. I remember never seeing very much of this game as a child, as an adult though this is no real problem I have given this game about two hours today and I am just a little bit away from the end, really it is a short game which is hiding the issue of its length behind a difficulty wall which would obscure this from its original customer base. I wonder how many kids threw their pads in anger and declared this game sucked just because it was a touch too difficult. Still their parents would have been annoyed if their kids had managed to finish it in two hours.

I guess I would give it a seven out of 10. I like it a lot but I don’t think its an all-time classic.

I brought this game from a market, just the cart itself. I can’t remember the price but I know it was somewhere between 50p and £3. Having taken a quick look the cart now seems to be going for anything from £15 to £25. If you’re into chasing retro games I would say its worth £15, but I personally wouldn’t spend £25 on it unless it was boxed and in good condition.

So obviously I wrote this around four years ago and I would feel bad if I didn’t point out that since I wrote this the great Robin Williams has passed away.  Just like all of us here he was a gamer. In particular he was a great fan of the Legend of Zelda for this and a million other reasons for a lot of people his passing felt like the passing of a friend or a kindred spirit. On reflection I still feel pretty much the same way I did about this game back when I wrote the review. I wouldn’t score it any differently but I guess I hold the game, the film and the whole thing just that little bit closer to my heart since Robin’s death. May he rest in peace and be forever alive in our hearts. 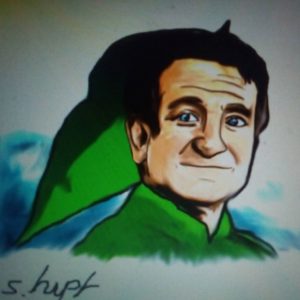