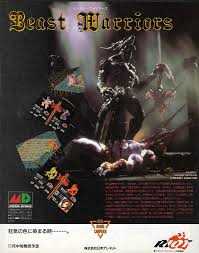 So the game I am going to be talking about now is a game called Beast Wrestler (also known as Beast Warriors in Japan). Did you ever have a game which as a kid you played so much it was a bit of an obsession? Maybe it delivered just the right cocktail of things you were into at that precise moment in time that it just felt almost as if it had been made just for you.

Well this is how I felt as a youngster about Beast Wrestler. I was massively into wrestling of the WWE favourite but I was also big into monster movies, so combine grappling with a creature feature and how can it be anything other than awesome? Load up the game and let it do its introduction and you will be greeted by the site of all manner of cool looking beasts and what I can best describe as some 16-bit foreboding Phantom of the Opera style music which really sets the scene. Hats of to the developers here, they really did know how to get people pumped.

Apparently the game was made by a company called Riot. Information on them appears to be rather limited but it turns out Riot was a subsidiary of Telenet Japan. It came into existence in 1991 when Telenet Japan was expanding but when Telenet started to lose sales in 1993 it was closed with some of its staff being transferred. It was was best known for employing graphic artist and later director Eiji Kikuchi, and music composer Michiko Naruke. The game was published by Renovation Products which was basically Telenet Japan’s US publisher of Sega Mega Drive games. Telenet would later go on to be purchased by Sega themselves, which is rather fitting seeing as they had heavily supported the Mega Drive and only ever released one SNES game.

So with monsters and such you might think that this game is set in the past. Well no, according to the Japanese manual this game is set in 2020 – two years from now. But heck when this game out in 1991 the year 2020 probably felt pretty darn space age, and basically it’s all about genetic engineering. Genetic engineering has allowed scientists to develop specific life forms called ‘dragon warriors’ and basically trainers have used these creatures to fight in a wrestling championship. So ladies and gentlemen I guess you have two years to save up your cash and decide what kind of monster you would like to own. This is one of those games where if you grab the US version there is some absolutely fantastic Engrish, there are plenty of words pushed together missing adequate spacing and some excellent typos which managed to slip through the translation process, in fact before your first fight you will be called a “bovice” when offered your first monster. If you’re a lover of funny Engrish then this game is one to keep an eye out thats for sure.

The visuals in Beast Wrestler are very mixed in my opinion. I find the monster designs to be very interesting. They are reasonably detailed and there is a fairly good variety of them and I think that they show a great deal of creativity. It is kind of from here that things get worse though the arena is plain, it lacks any real care or attention, plus you probably noticed I said arena not arenas. That’s right there is only one so you better get used to looking at the same backdrop as you play. I am also sad to report that the graphics look even worse in motion than they do in static screen shots. This is because the animation on the whole is pretty darn stiff and could seriously do with the frames of animation being doubled, it looks odd and well janky. It feels like someone took a lot of time to make the beasts and they were then just poorly put into the game.

The music in Beast Wrestler is far more consistent than the graphics though, and more importantly it is in my humble opinion pretty darn great. It has this fitting orchestral meets 16-bit sort of feel, it really feels like the most of the Mega Drive’s sound capabilities was used here. It really does help the game to try and create a dramatic atmosphere. The sound effects though I kind of think they’re a mixed bag. The hitting noises are not too bad and the noise when the beasts hit the ground offers a nice satisfying feel, but the noise used when one monster bearhugs or chokes another is pretty grating and all of the monsters roar the same when they are beaten.

When it comes to gameplay, Beast Wrestler is once again a mixed bag. You move your monster/wrestler around with the D-pad with the A button being used to punch, the B button being used for tail-based strikes, and the C button being your special/signature move button. The idea is to beat your opponent’s monster till it cries out on the ground three times. Once you have managed this then you have won the fight. In order to do this you need to cause damage to your opponents’ monsters and you do this by punching, tail whipping, body slamming, and clotheslining the living heck out of them. In total honesty though it is a bit of a button masher, it never seems to feel like quite what you want is happening.

The game has two modes: match and tournament. Match mode is basically your versus or exhibition mode. In this either two players can go head-to-head with 10 selectable beasts, or one player can fight a computer controlled beast. This is basically good either for just practising or having a quick go with a buddy. Now tournament mode is the real game, the story mode. Here you use a pre-chosen creature and fight battle after battle. The game has three acts the Pro Test, Domestic Rank and World Rank. You don’t have to finish the whole game in one sitting as passwords are provided but they are pretty long so that’s worth bearing in mind.

After every other match you win, you get the chance to spend some of your winnings. You can use these to get various items and serums that can help you raise your monster’s speed, strength or stamina. At certain points you will also be forced to merge your beast with a choice of monsters you have already defeated, being told that your monster’s badly injured and without merging it its life will be at risk. I think this is part of what really gripped me back as a kid and it’s something I don’t remember experiencing in a game before and wouldn’t again until I played Monster Rancher on the PS1 ( A game I would strongly recommend even if it is incredibly pricey).

So despite loving this game as a kid it’s time to let rip now. The game has a lot of issues – the first being that the grappling and damage systems seem unreliable. A lot of the time who wins a grapple seems to be really random, you try to pound the buttons or press them at certain times and nothing quite seems to help your situation. Apparently the US instruction booklet states that timing is key but in all honesty if there is some kind of proper way to time things I have never really worked it out.

Weirdly your character can face in six different directions, but can only attack in two of those directions. There is no block and no real dodge so there’s not really anything you can do defensively. Add to this the hit detection seems to be a real mess. When you’re fighting the big upright monsters punches and tail whips hit well enough but don’t work very well when your fighting against short enemies. Sometimes it looks like your blows really shouldn’t be connecting and yet somehow they are. Soon you will find that you’re kind of managing to get by but it’s not because you have learned how to play the game its more like you have learned a little bit of the game’s broken logic.

OK, so its a little bit hard giving this game a rating as it was a pretty big part of my childhood. It was a game I invested a lot of time in and yet I want to be totally honest, this game is a real mess, and for that reason I need to give it three out of 10. I don’t think the game is without merit, there is in fact a lot of things I like about the game but it really feels like it needed a lot more work for it to be a good game. If you want to try the game, it never came out in Europe, and US copies very rarely seem to go up for sale so really you will probably be stuck with a Japanese version and the prices are all over the place. I have seen fully boxed versions go for around £13 but some people seem to want a lot more than this for it. Really I wouldn’t worry that much as there are much better things to spend your cash on.