I have never played this game before, sure I’ve played Mario Kart, but not Konami’s version of it.

I was happy to have played it though, it’s actually very good in it’s own right. It’s going to be instantly compared to Mario Kart, as they are both similar games and Mario Kart id the fore barer of the Party Karting Genre. Anyway, While it doesn’t have the variety of items, for example the items I came across where a boost, when hitting a blue bell, or from hitting the red bell I’d get a triple rocket, a red homing rocket, ice block, bomb and maybe 1 or 2 more things there was enough variety in the items to make it fun and not feel stale and repetitious. Another thing is that you may be less familiar with them over the Mario counterparts, but the gane has Dracula from Castlevania as a playable character it instantly derserves to get some recognition for that. Over all the game itself stands well against Mario Kart.
Visually it’s a great game with detailed sprites and backgrounds, musically it’s nice to listen to with music being taken from the games the courses and karters are taken from.

The actual gameplay is you standard party karter styled game where you pick a character and race through cups to get a podium finish, while this does change up the formula by having you take test to get a B license and A License, if generally doesn’t stray to far away from the standard formula. The gameplay is good and the karts all control well enough while feeling different enough to that other karting game, and I had no trouble with taking corners while slowing down, but it seems that this game is an easy to pick up hard to master kinda game as getting the drifting down is not easy.

Where do I begin? Well, let’s try with the visuals. Visually the game is actually pretty decent with some interesting sweets used on the first few stages.

Now we come to the gameplay, the most important thing for a game is to have interesting or generally just good gameplay, Zool fails in that respect, it controls are naff, the game seems to be very faced paced, but kind of unable to keep up with itself, everything about the gameplay screams C rate trash.

I don’t really have anything positive to say about the game other than it made me want a Chupa Chubs lolly.

It’s actually quite hard to say much about the game negatively or positively as it’s just nothing of interest to note, due to the game being so mediocre. 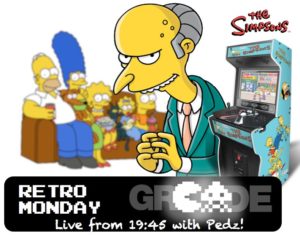 This week was the week that we celebrated the 1st year anniversary of Retro Monday, and to celebrate I managed to get 3 other people to play a co-op game with me, that game was The Simpsons for the Arcade.

The Simpsons was released in 1991 and was your classic Konami beat ’em up. The game itself was a side scrolling 2D brawler where you play as the Simpson family trying to rescue Maggie from the evil clutches of Waylon Smithers. You get to play as Marge, Homer, Bart and Lisa,  they all have the same basic attacks though I believe there is a difference in their ranges.

Visually the graphics are nice and many of the classic Simpsons characters can be seen through out from Barney Gumble to Side-Show Bob to even more obscure characters.

We managed to play through the game to completion, but it was no easy feat, the difficulty on normal folk isn’t to bad, but the bosses and some other enemies have some pretty cheap mechanics that are involved just to take your money, we blasted through a ton of credits by the end. The game is fun to play though and with people it’s a great laugh as we quoted Simpson references as different characters appeared on screen, or just in general. The one thing I can say that playing this is immense fun with a group of people, I don;t think it’d be as enjoyable on your own, the whole point is the 3 playere co-op.

All in All I would recommend this game whole heartedly due to it being a genuinly good Beat ’em up, but if you can get a few friends together you’ll have a whale of a time.