This week for Retro Monday, I played Chalkitdown’s pick, “Low G Man: The Low Gravity Man”, an action platformer released in 1990 for the Nintendo Entertainment System. I’d never played this before, but I had heard good things about it. Well, lets start with how it looks. The style of the game is pretty great. The visuals are well done with the colour palette used being very effective. The sprites are all good also.

Now on to the gameplay and it’s got an interesting twist. You shoot your enemies, but that won’t kill them. You shoot them to stun them, which then allows you to walk up to them, and either jump on top of the enemies and press down and fire to spear them or up and fire if they are in the air above you. It’s a really cool mechanic, and it would be interesting to see something similar in more games.

The level design is also on point for the most part. The levels are side scrolling but some have verticality to them also. One issue I did have was in the water level (I think level 2-2). This was all vertical, which would be fine, but it scrolls downwards, causing you to drop into enemies you couldn’t possibly know were there.

Now as with most Retro Monday games, this is another I didn’t complete so I can only rate it on what I have played. I’ll be honest I really enjoyed it apart from a few things. The water level and a couple of the bosses, which can be a pain in the rump. All in all I’d say this is definitely worth a look and you could do a lot worse than this. Give it a try, you have nothing to lose.

In the 90’s EA used to make a variety of games that they don’t seem to make now, one of those games series was the Strike games. There were 5 in total, but today we’re looking at Desert Strike: Return to the Gulf, which coincidentally is also the very first game in the Strike series.

As a kid I remember sitting in my room, blowing up buildings, gunning down enemies and saving some good guys, basically I have fond memories of Desert Strike and really enjoyed it back in the day. Playing it again Monday though, I felt the game just wasn’t as good as I remembered, I only played the first level – honestly the game is tough – and the game could improve from the second level on wards. Don’t get me wrong the controls are good and tight, the level design is fine. It’s just that the game seems to have too many things happening at once. By that I mean you’d be in the middle of a battle with some AAA’s and then your fuel will run low, you missiles will run out, you then have to leave the fight to go and find fuel barrels and ammo and go back to carry on. You also take damage really quickly, so to replenish your armour you need to rescue soldiers that are M.I.A and safely deliver them to a raft, it’s all good in theory, it just, to me, spoils the flow of the game. Now that’s said it’s still a good game, it’s great when you take out a reaper, or a load of AAA’s and few vehicles with rockets on them and a couple of grunts before taking out an airfield of its planes and buildings all while leaving craters in the desert sand, and as I have previously said the controls are spot on. I would definitely recommend playing the game if you’re interested in retro titles, it’s a good game that is quite difficult to master, but taking down the enemy is extremely satisfying.

For nearly the past year I have been doing Retro Monday, which has been fun. I’ll let you know what it is before I talk about why I’m making this post.

Every week a person from the forum is chosen to pick 3 retro titles, those 3 games are then put to a vote and the winning game gets played on Monday at 7:45pm (BST) by me. I’ll be looking at games from the Nintendo Entertainment system, Super Nintendo Entertainment System, Master System, Mega Drive, Gameboy/Color, Gameboy Advance, Game Gear and classic PC Titles. I’ll only be playing them for an hour at a time. If I really like the game I’ll play them more through the week. I have done this with QuackShot Starring Donald Duck. I have also completed some other games during the hour stream (Star Wing/Star Fox and Contra.)

OK, so with that out of the way Here’s my plan for posting here.  Every week I will keep you all up to date with my thoughts about the retro titles I play on Monday and also how good I think they are. 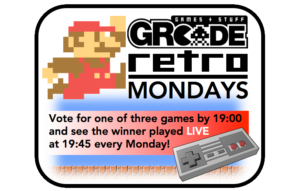 Obviously not all games will get a complete play through, but I’ll give an opinion the best I can and if you disagree you can leave a comment telling me exactly why. It’s all in the nature of fun though and nothing to be taking too seriously. Roll on Retro Mondays!!