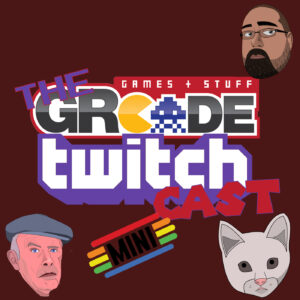 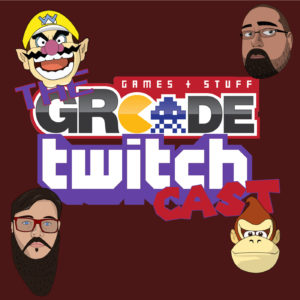 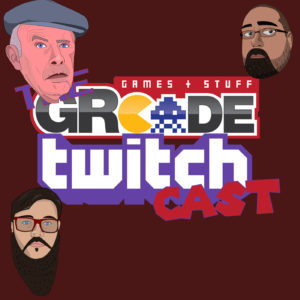 This week Victor Mildew and Pedz start the GRcade Twitchcast and The Doom Spoon joins a little later into the show.

The topic of conversation starts with Victor detailing his experience with Borderlands 3 and how he and his wife have enjoyed playing it together, even though there were issues with the game on a technical level, along with how he thinks the game compares to the previous 2 in the way the game plays and if anything has really changed from the last 3 borderland games… BUT, what about all those guns? Did they change things up for Victor and Mrs Victor or did they simply select the guns that do the most damage and the wackier items go unused? Well, Victor does tell you about this too.

After Borderlands 3 chat Victor is eager to talk about his experience with Luigi’s Mansion 3. He says he has yet to finish the game but believes it’s worth talking about. The previous Luigi’s Mansion games are talked about and Victor explains if the LM3 is like the first 2 in how they play, while also explaining about how Luigi’s Mansion turned his head towards the Game Cube.

Talk moves over to a retro title that Pedz has played and finished recently. The game is Super Wario Land: Super Mario Land 3. Pedz had played a few levels in the past but didn’t really give a long session. Victor is also a fan of the game, and both discuss how it differs to Mario Land 1 & 2 and how Wario’s playstyle is a very interesting change from the norm with how Mario and Luigi are to play as. The ending is also talked about and we get to hear just what ending  Pedz got.

Doom arrives during the Wario Land chat, but the topic soon moves to Sonic Lost World. This is a game that Pedz recently finished. It’s a 3D Sonic game and that usually means the game is likely bad to very bad on the ‘how good is this game?’ scale. Pedz does have some positive things to say about this one though. Maybe playing Sonic 06 and Boom back-to-back broke his mind?

Unfortunately, this is where the wonderful Victor leaves us in this episode of the Twitchcast, but Pedz and The Doom Spoon carry on talking games and it’s another game played by Pedz. The game is Paw Patrol On a Roll. Well, I don’t know what Pedz was thinking he would get with the game, but, he certainly expected a game with a little challenge even if it is for young children, and who’d have thought there’d be SO MUCH voice acting? Pedz was shocked by all the chatter.

Doom finally gets to talking about one of the things he played recently, and the first game is Call of Duty: Modern Warfare. He says there’s the ‘odd’ glitch that is an issue, but overall the game is a positive experience for him.

We have Doom now talking about Ghost Recon Breakpoint, with the issues the game has, Ubisoft apologising for cocking up, but the chat generally turns to glitches, general issues, betas basically being demos before getting back on track.

Next up is a game called Farm Together, and this is an online game where you do farming and seemingly you can open or close our farm to random people to join in and help you out. How does Doom cope with randoms in his farm spending all of his money? There’s a simple solution that seems like a really good way to keep things friendly and stop people from abusing your things.

Pedz leaves briefly here for a toilet break, but Doom keeps talking to chat and he is asked about Arsenal, as in the football team.

When Pedz gets back the focus shifts back to video games and chat asks what are the hosts thought’s on if Activision were to sell the Single Player at the fraction of the price of the full game. Pedz and Doom have a short chat about it, and if they’d be more interested or willing to buy CoD if you could buy the game in 2 parts.

We then have the retro title that was meant to be talked about several weeks ago, but with Doom and Pedz having various things come up in real life it was always pushed back. Well, Kirby’s Dream Course, which was chosen by Mattking85 in the twitch chat finally was discussed. The interesting thing is Doom and Pedz both had wildly different views on the game.  Afterwards, a new retro game is chosen for Doom and Pedz to play. Doom has not played it, but Pedz has.

Lastly, there’s a little chat about Pokémon Sword and Shield, which is out the next Friday after this was streamed.

During the Twitchcast, when talking about glitches, Mattking85 said he was reminded of Assassin’s Creed IV: Black Flag, and I have the YouTube link here for those that want to check it out. It’s pretty interesting and you should definitely check it out: Link