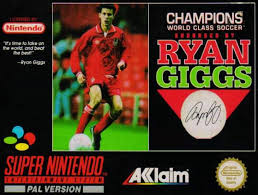 Ryan Giggs Champions World Class Soccer was the game I played a little last night as well as early this morning. It is obviously a football (soccer) game and it was released on the SNES as well as the Mega Drive. It was developed by Park Place Productions and published by Acclaim.

You might not have heard of Park Place Productions largely because they were a bit of a bright light that burnt out very quickly. They were founded in 1989 and in 1993 they had become the largest independent developer of computer games. They had  130 developers making 45 games for 14 different publishers. At the end of December 1993 the company collapsed spectacularly. Basically they didn’t hit some targets they had been set by publishers and as a result of this they were denied payments, pulled out of contracts and literally left Park Place Productions up the creek without a paddle.

The first thing to note is that the whole Ryan Giggs thing is a bit of a con. The UK release featured a picture of the player on the game box and the cartridge label but any real connection to the guy or inclusion of his name ends there. The German version featured a player famous to them Sepp Maier, and the French featured a team likely to interest them, Paris Saint-Germain. None of the three have anything to do with the game beyond the box art and cartridge label though so from now on sod Giggs I will be referring to this as Champions World Class Soccer (or CWC Soccer if I get lazy).

Modes of play included in the game are the standard type, exhibition match and tournament mode. There are the obvious options to turn certain things off and mess with how long the matches last etc but nothing out of the ordinary. The game’s presentation is pretty decent. There is a TV announcer talking about the match before it starts – talking as in text along the bottom of the screen, but the text is pretty cool. It mentions which team you are and what is good or bad about you. For example I got something on the lines of the following for my first match: “England have always been good at defence but there shooting record is a little unpredictable”. The in game graphics are pretty much the bog standard average football game graphics from this point in time so I don’t have a lot to say about them, they don’t make or break the game.

I like the fact that there is a big blue star around the character you are in control of. It is very easy to know who you are and then there is a button which seems to exist just to help you do little tricks either dribbling the ball around your feet, turning backwards for a second or shooting forward quickly – well, quickly for this game. Unfortunately this is the point at which my review has to get a little bit sour I am afraid that personally I feel that the gameplay is bad. The game is slow, both passing and shooting are hard and frustrating to the point you’ll soon find yourself turning the air blue. Sometimes it takes a few seconds for your character to become properly attached to the ball like you do in most football games. You will have ran on to the ball and it just wont end up under your control so you’ll be running backwards and forwards hoping it attaches to you and then a computer controlled player will just run straight up and claim it with no problem or pause in proceedings.

In my opinion this game is the worst SNES football game I have played so far. I like the TV start, I like the fact it makes it obvious who you are but I don’t really like the controls or the gameplay. It also didn’t give me my any of my demands such as great goal scoring animations or a voice shouting “Goal!”. I would give this game four out of 10 . It’s not unplayable but there are much better games out there for your cash. If you decide that you simply need this game to live the good point is it will cost you only £4 or £5 to buy it online and get it posted to you.