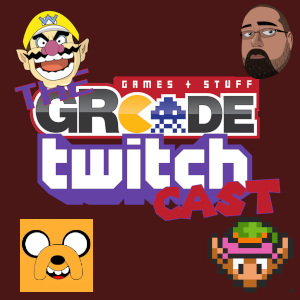 A nice simple one this week, the guys react to the announcements that were in the latest Nintendo Direct.

Kirby’s Block Ball is a spin-off game from the Kirby platforming series. it was made for the Nintendo Game Boy in 1995, it came out later in Europe in 1996 and it is was made by Hal Laboratory.

The game is an action game with a pretty simple premise, you move along a small paddle and hit blocks with a ball. Think Breakout. It’s more complex than Breakout though, it has paddles on the top and bottom for a start and your ball can change into a full-size Kirby with timing a button press precisely and it’s an ability that lets you break blocks that you normally wouldn’t be able to break. Later stages and boss stages include paddles on the sides of the stages too. It’s also more varied in the stages too, unlike Breakout where it’s basically hit a ball at blocks until you lose all you balls, this game adds enemies, bonus levels, obstacles and more, there’s also power-ups, that help you break more blocks and do a variety of things. I only got to try the Spark powerup, which breaks certain blocks and also continues through several blocks at a time, whereas normally you’d break one block and the ball will bounce back.

The game is fun to play, basic, simple, but jolly. I think it works really well, it has a really good ‘one more go’ feel to it, it’s also a perfect game for quick pick up and play. It’s interesting, taking something that’s been done before, but adding a lot of unique and interesting concepts to it. Visually the game is alright too, the sprites are all good, but obviously being a GameBoy game where you hit blocks, it’s a little bare, there’s not much to excite the eyes. Then there’s the music, it’s great, but there’s so little variety, it’s unfortunate that they used the same track for every stage as changing it up would have been much better.