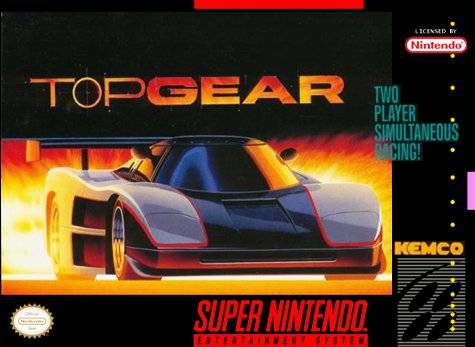 The game I am reviewing today (18 August 2014) was originally called Bombuzal and was made by a company called Image Works.

It was originally released for the Amiga, Atari ST and Commodore 64 but in 1990 they brought out a SNES version. For a reason unknown to me the US version which is the one I own was retitled Ka-Blooey. I don’t have any opinion if one title is better or not and as I never played this as a kid there is not a name I am more used to.

Image Works didn’t usually make games. They were usually known for being publishers. They published around 40 games and only made about four games themselves, and this is the only one which made its way to the SNES. So this is the last time I will be mentioning them in this series. Strangely enough despite being mostly known for publishing games they didn’t actually publish this on the SNES. This game was in fact published by Kemco, whose name is an abbreviation of Kotobuki Engineering & Manufacturing Co. They were a Japanese video game developer and publisher established in 1984. Kemco is probably best known by SNES owners as the publisher of the Top Gear series but that’s a story for another day.

The whole idea of Ka-Blooey is to try to set off every bomb on a level without killing yourself. At first this seems a little easy – you step up to a bomb, you hold a button, a countdown starts and then you move out of the way just before detonation. I know this sounds very simplistic but think about most good puzzle games. Tetris is just a game where you spin blocks around and form lines and yet that was probably one of the most popular puzzle games ever wasn’t it? Yes, the game starts off very simplistic but more or less every level something new is thrown in to the mix, and new problems are presented for you to try and overcome by using your grey matter to formulate a plan using everything you have learned up to this point.

There are apparently more than 130 levels and they get more and more challenging as you go. The graphics at the time were trying to be all 3D and cool, your sprite is large and has quite a bit of characterisation but in this regard the game hasn’t aged well. The water for example is just made up of blue rectangles. Sure everything is functional and easy to see so you can never blame the graphics for your failure so at least it has that going for it. The music can best be described as what elevator music must sound like to a man on acid. Add to this the fact that there are only something like five actual in game sounds – a teleporter sound; an explosion sound; a sliding sound; a dying sound; and a voice saying ”get ready”. The game is far from being either an audio or visual treat.

If you’re into games with a story then it is important to note this game has literally no plot at all. Sure a lot of great puzzle games don’t have plots but with this game having a central character you look at I do think a tiny bit of a story would help push you to make your way through the levels.

As you get further you will see that there are different kinds of bombs and you need to get used to how they blow up, how you can use this to your advantage and how to make sure you don’t end up blowing yourself up. On later levels there are enemies such as boulders and some weird looking things (I have no idea what they are actually supposed to be) which go around and which you need to blow up. There are also obstacles like ice blocks that make you slide and cracked blocks that fall after you walk over them and hard blocks that can’t be blown up.

The game controls OK, but it moves very slowly which doesn’t work in its favour. I never once found myself being particularly excited by it. At times you felt smart for working a problem out, but really from my perspective there was far more grind than there was enjoyment and that’s not the sign of a good game. 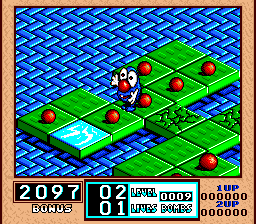 If I am to be totally honest I rate the game smack down the middle five out of 10. If you want to buy retro games there are a lot of better games out there to spend your money on.

It’s a functional puzzle game which both frustrates and rewards but at the end of the day it is deeply forgettable. I think I would have been a lot happier if I had played this game back on the Commodore 64 or the Amiga as it probably would have been a reasonably cheap game but if I had paid the price of a standard SNES game for this at launch I would have felt pretty darn annoyed.

As far as I can tell this game never got a PAL release, so if you want to play it then you’re going to have to buy an American Ka-Blooey or a Japanese Bombuzal cart. There is no real need to read anything for this game so either would probably be fine as long as you have either an import machine, a modified machine or a convertor. The price for this game cart only seems to be around £7 to £10. I got mine years ago when I was in Canada in what can best be described as a giant charity store for about CAN$3 after tax was added (they add tax at the till on top of the price you see on the shelf/tag, unlike ours which is included in the price you see).