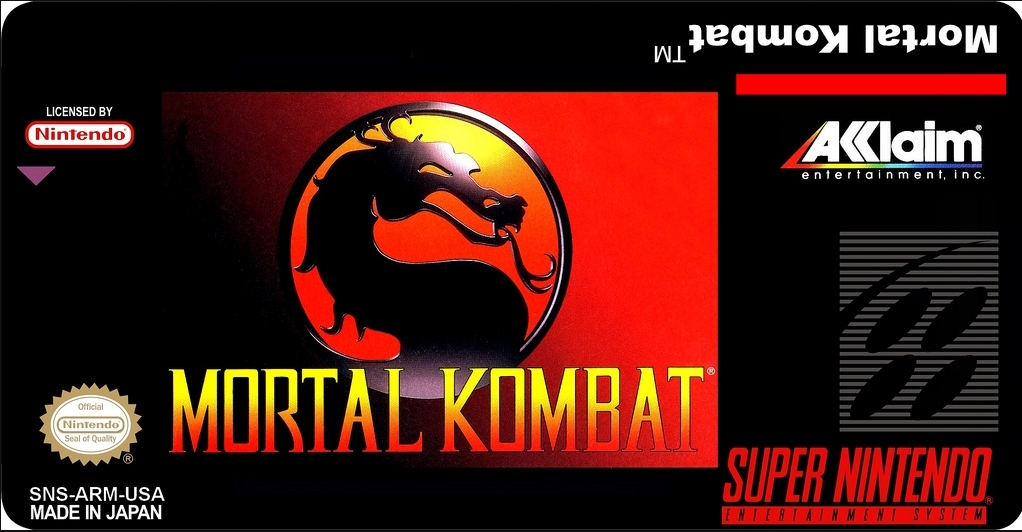 My game today is Mortal Kombat the arcade fighting game developed and published by Midway (in 1992) It was subsequently released by Acclaim Entertainment for just about every home video game system that existed back then. It was a massive seller and was one of the few competitors for street fighter 2’s crown in a market which was usually filled with awful semi functioning clones. It started a whole series of games but more than that it actually spawned a successful film adaptation in 1995. It sparked a great deal of controversy though for its depiction of extreme violence and bloodshed by using realistic (for the time) digitized graphics. This game was involved in several hearings on video game violence the results of which resulted in the introduction of age-specific content description ratings for video games. This game certainly changed the world of video games.
When mortal kombat came it came riding a huge train load of hype, at the time nearly all games were released on a friday but mortal kombat just had to break the trend it was released on a monday which was dubbed Mortal Monday… No matter how long ago that was I still remember it for one reason and that’s the fact that the man who owned the local games shop agreed to give a select number of his loyal customers the game on the friday before that. My brother was one of them, he brought the megadrive version and we spent the entire weekend before its release playing it.. Its not uncommon now to get the odd game a day or maybe two before release because it has been posted out and arrived early but back then this was more or less unheard of.
Eventually I decided to get the snes version when I saw it at a greatly reduced price. Now a lot of people would expect the snes version to be an improvement and maybe the graphics were a touch clearer but if anything the gritty quality of the megadrive version actually helped to give it a certain grind house feel and if anything covered some of the blur present in the sprites a little and that’s before you even got to the infamous blood code. On both the snes and megadrive versions of mortal kombat when you put them in the machine they would load up and one of the first things you would notice was the absence of blood. For the mega drive there was a simple code you could input which would switch on the gore, unfortunately the snes version simply did not feature this and no button combinations or joypad caresses would get claret flowing.
A snes magazine in the uk actually ran an april fools which tried to make its readers believe that the blood was in there as well as an option to play as the boss characters but that the cart needed extra weight adding to it to make all of this obtainable. What they told you to do was glue a one pence piece on to the top of your cartridge before going through a combination of button presses which would open some kind of debug menu. I remember that even after they had admitted it was all a giant wind up I would come across seconds hand copies of the game in various stores and markets which still had a penny firmly glued to the top of them. The funny thing is there were kids at school who swore on there life that they had gotten into this debug menu and then promptly denied ever having said it latter. Now the game mortal kombat often gets compared to is street fighter 2 and yes I admit street fighter 2 is better for combos and has several other advantages but I think MK has enough of its own qualities to warrant its place in the fighting fans collection. Personally I love the characters and there back stories sure people will argue that sub zero and scorpion are essentially palate swaps but there portrayal as mortal enemies from warring clans and just how cool they both were in general was more than enough to make me not care. In some ways it can be said the graphics haven’t aged as well as more basic sprites but I don’t know something about them appeals to me and kind of reminds me of old kung fu films I guess its down to your personal preferences. One thing I loved with Mk was the music and sound effects the beat in the various songs just got you in the mood to rip somebodies head off and the sounds being cried out such as scorpion shouting ”get over here” just had an epic quality to them. I find the game greatly playable but not without its limits, the way I see it is as an excellent starting block for a franchise and I can’t help but give it a 7 out of 10. (I give the mega drive a 8 out of 10 though it just feels more tailored to the system and I guess I am just ”loyal to the gore” (bonus points for anyone who knows where this quote comes from)
If you want to play the game on your SNES it is going to cost you around £10 for a pal cart or about £20 for a boxed copy, if you own a megadrive you might want to consider getting a copy on that instead. I also dont want to give anything away but you might want to look at the prices of other games in the series as well.