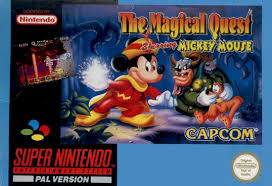 Mickey Mouse was the best known character in the whole world, but back in the late 1980s/early 1990s, Mario was just about everywhere – and not just in his video games.

He had his own cartoon series, The Super Mario Bros. Super Show!, and then it spiraled from there to the point he had his own action figures, stuffed toys, shirts, candy, and even a breakfast cereal. At one point in time you couldn’t do anything without seeing Mario.

On the other side, Mickey Mouse in comparison wasn’t seen as much. Sure he was on t-shirts and at Disneyland but he wasn’t quite as up front and in your face as he had been. Television channels tended to air the more modern Disney cartoons of the time such as DuckTales, Chip ‘n Dale: Rescue Rangers, TailSpin, Darkwing Duck, and such.

Disney teamed up with Capcom and brought a fair few titles to the NES, most of which are considered classics, such as DuckTales. Disney’s relationship with Capcom didn’t end with the NES though. Eventually the union brought us the game I am going to talk about today The Magical Quest starring Mickey Mouse (known in Japan as Mickey’s Magical Adventure).

The game is a bright, colourful platformer with the player taking on the role of Mickey. It’s part of a trilogy released by Capcom although we Europeans only got two out of three games (in fact, Japan was the only territory to see the third one, at least until they got GBA remakes). You move in the same sort of fashion as in most typical platform games, and you can defeat enemies  by jumping on them but you can also attack them by grabbing blocks and other stunned enemies spinning them around in Mickey’s hands and then using them as a projectile. One of the gameplay features this game is most known for is the ability to find new outfits for Mickey, which give him different special abilities. For example, you get to play as firefighter Mickey who can use his hose. Sometimes this feeds into puzzles as well as being an option for attack. For example you might have to put out a fire to progress. It reminds me of the Mega Drive title Kid Chameleon, which seeing as I love that game is not a bad comparison at all.

The graphics are great, full of colour and character. The sound is cheery and matches the overall feel of the game. The controls are good – I don’t think they are quite Mario good, but they certainly more than do the job. When it comes to complaints some people would bring up the fact that The Magical Quest is quite an easy game, but that’s understandable since it stars Mickey Mouse. Capcom clearly knew a lot of kids would be playing this, so if it was Super Mario Bros.: The Lost Levels-hard it would have just led to mass complaints and screaming children. It’s not completely unchallenging, there are a few skills and basic patterns to learn and it’s kind of nice to find a game which focuses on the fun and doesn’t penalise you for anything. You have unlimited continues, when you die you start again with a full set of hearts and don’t lose any of your coins.

If you like fun platform games I would urge you to try this game. It’s a brilliantly uncomplicated slice of fun. It might be a little easy, and it might be a touch short – in fact, its length is the only real thing keeping me from giving it a huge score. All things considered I think I need to give this game a 7.5 out of 10.

If you’re after the game I tend to see it going for around £10 for the cart, although big warnings have to be given about the fact that the second one is rarer, and if you want to play the third SNES one you’re going to need to go down the import route. One way around this is to go for the Game Boy Advance remakes. They are more or less the same games with a few extras thrown in and they might be a little cheaper and easier to get your hands on (Plus you can get a European version of number three for the GBA).