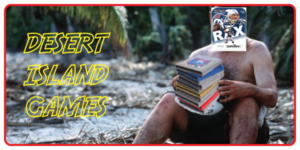 Here we are with the final part of Rax’s Desert Island Games list and we get find out games 6, 7 and 8. We’ve only had 1 Nintendo title up till now so maybe the big N will feature a little more heavily in these.

Game 6 is the latest edition in Nintendo’s long running Legend of Zelda series. Released only a few months ago simultaneously on Wii U and Switch having originally been in development solely as a Wii U title, it marks a significant change in direction for the series by moving to an open world environment. It released to universal critical acclaim and currently has a metacritic of 97%, placing it as one of the highest reviewed games of all time. Rax’s next choice is The Legend of Zelda: Breath of the Wild on Nintendo Switch.

So Rax, another Switch game?
The weird thing is I don’t actually own a Switch yet but 2 of my games are for that console! But I have played both of those games on Wii U and figured I’d put the Switch version on there for the extra bells and whistles they include on those versions.

How far into Breath of the Wild are you on Wii U?
I don’t have a huge amount of time for games these days but this had my undivided attention for over 2 months and while I put 80 or so hours into this I still feel like I rushed parts of it. I’ve beaten Ganon, done all the memories and I’ve gotten all the shrines but I don’t feel like I’ve seen most of what the world has to offer. I’ve seen a few secrets, things I wont mention here, but I have the feeling there’s plenty more out there for me to do. For one thing I only have around 100 Korok seeds so there must be pretty large chunks of the map that I haven’t paid much attention to. In completionist terms I’m at around 25% so there’s plenty of Hyrule left for me to explore.

Game number 7 is a very distinct change in style but also comes from Nintendo.  It’s the third game in the once popular Advance Wars series and was released on Nintendo DS in 2005. Following on from the first two GBA games, it was incredibly well received and holds a Metacritic score of 90. It was praised for it’s use of the 2nd screen and was the first Advance Wars game to add a non-hot seat multiplayer mode.  This game is Advance Wars Dual Strike.

Why Advance Wars Dual Strike over the other games in series?
For me it’s the best version of the game. The GBA game was great, I know it wasn’t the original, apparently they’ve been a thing in Japan since the NES days but it was a great introduction to the series and I was super hyped for the DS version. Thankfully it didn’t disappoint, it improved on just about everything and added so much more. Its one of the most packed games I can think of as well, with the story mode, multiplayer, challenge maps etc, I have sunk a couple of hundred hours into it and I still haven’t come close to finishing everything. A long stretch on a desert island would help with that!

And so we come to the final game on your list. Originally designed and programmed by Russian game designer Alexey Pajitnov, it was first released in 1984 and has since appeared on just about every platform imaginable. It’s mainstream success though was mostly due to the Gameboy version which was released in 1989. It has had countless sequels and one of which is your last game, Tetris DS.

What sets Tetris DS above the other iterations for you?
I suppose for that one its a case of having more fond memories of that version. Like everyone else on the planet, I had a Gameboy as a kid and I played Tetris on it but it never was something I was any good at or remember playing that often. But the DS version is one I played for a whole summer while I was in Chicago. Obviously I couldn’t lug my 360 there so I brought my DS and a bunch of games but the one I played the most was Tetris. I spent the whole summer setting my high score, the sleep function on the DS was invaluable for that, I could play for a bit then put the DS into sleep mode and resume where I left off. I got pretty good at it and just have stronger feelings for that version of the game over any other.

So to bring this to a close, some people might be surprised to see no Madden in your selection?
I’m not actually a big fan of the Madden games, I used to get the new one every year but it never felt like there was much change from year to year so I stopped getting them. I’ve never really missed them either as I always just played through season mode and never got into the multiplayer side of things.

Anything else notable that didn’t make the cut?
As I mentioned earlier there’s a bunch of games I love on N64 and 360 that didn’t make it in. Halo in particular was on the list for a long time but when I stacked it up against others I found myself liking it less and less as a desert island game. The absence of an N64 platformer was a surprise to me as well, I love Super Mario 64, Banjo Kazooie and Conkers Bad Fur Day but in a lot of ways they’re not games that lend themselves that well to playing forever. Also if this list had been made 5 years ago I probably would have included Goldeneye or Perfect Dark on the list but I don’t think they’ve held up that well, they’re still enjoyable but I don’t think I could get past how bad they feel now. They’re still great games but having played newer shooters they just feel dated and I couldn’t keep them on there,

I also considered Pokemon and various JRPGs, Dragon Quest in particular, but as great as they are and as long as those games last there’s not a huge amount of replayability with them so I had to cut them.

Many thanks to Rax for sending over those contributions and I hope you all enjoyed reading his choices. It was definitely a case of head over heart with his choices with a particular emphasis on longevity. How he’ll cope with never being able to play Mario 64 or Halo again though we’ll have to wait and see!

As he sails off into the distance with his bundle of games, I’ll (hopefully) be back in a sort while with the next contributor!