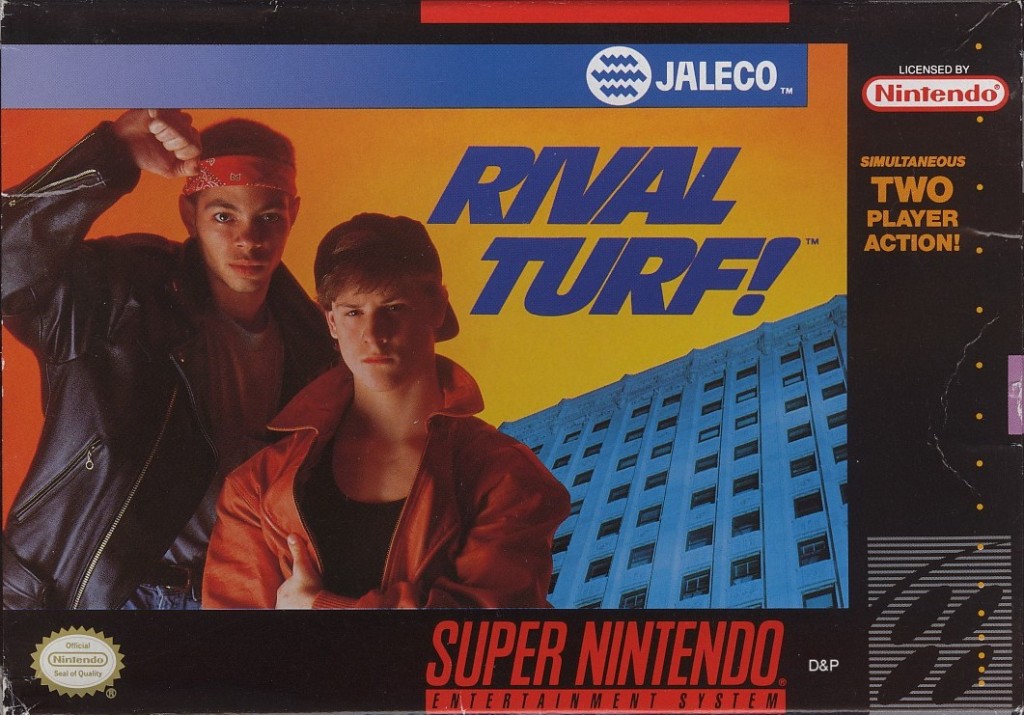 When looking at Jaleco’s Rival Turf! (known as Rushing Beat in Japan), it’s important to understand something about it, something which you cant help but think is the entire reason for its existence and its release.I have already reviewed and talked about the SNES conversion of the arcade hit Final Fight. Now as you will probably remember from my review Final Fight woo’d people with its pretty much arcade-quality visuals and sound. It was an epic achievement getting the game to look and play so well on the SNES especially when you take in to consideration the huge difference between the hardware inside coin-ops and home consoles at that time, but sadly as I mentioned when reviewing it not every thing was exactly perfect: the two-player mode that made the arcade original so brilliant was missing due to memory constraints.
This left a demand out there for people who wanted to play a walk along beat em up together and Rival Turf was basically Jaleco’s attempt at filling this void. You will find people who love this game, people who hate it and people who while appreciating it for offering what it offerd at the time
ultimatly now see it as being a game which was average and could be forgotten about as soon as other games came out which filled this void.
Now for some reason the plot of this game was massivly changed from the Japanese version when it was released in Europe and America.
In the Japanese version the plot is something along these lines. Rick Norton the main character is stopped by a man with a gun who informs him that his sister is being held hostage something to do with some video evidence she has in connection to drug dealing. So after this Rick goes on a quest to clear up the streets and try to rescue his sister.
In the Euro/American version well the main character is called Jack Flak and his girlfriend has been kidnapped by a gang called the Street Kings. He asks police officer Oswald “Oozie” Nelson who is his friend to help him to rescue her and basically beat the ever loving crud out of the Street Kings and wipe them off of the streets. I imagine most of this change is down to Nintendo basically wanting Jaleco to remove the reference to drugs as after all Nintendo was quiet picky about what it would and wouldnt allow on its consoles. I find that the graphics for this game are good when you look at the time at which it was released, they are not really as good as those in Final Fight but you can tell that this is one of the areas where things have been cut back a bit in order to free up the power needed at that time to allow for the two player option. I find the music in this game to be quiet catchy, I am not sure if any of it  is the sort of thing that most people are going to find themselves humming in there day to day life but the music from the first level seems to have stayed in  my mind over the years,  It is one of the video game tunes that I could humm pretty much on demand and this is not because I have recently played this game to review it or because I heard it while recording the footage, I could have done this long before I put the cartridge in the slot to play it again to refresh my opinion ready to do this review.
The game plays well enough but there is also nothing other than the inclusion of a two player mode which makes it shine. There is only a choice of two characters and while they respond well and are easy to control you cant actually do that much, its rather basic in terms of what you can do and this does work against the game as it does start to feel a little repetitive as you work your way through the stages.
In conclusion I would give Rival Turf a 6 out of 10, for a moment I was tempted to give it a 7 as I have a bit of a soft spot for it, mostly due to a lot of good memories of playing it back in the day. In all honesty the game is not as good as final fight but it does of course have the two player mode that final fight lacks. One of the issues is that nowdays your choice is not one simply between this or Final Fight ,  there are all manner of games of this type you can play, there are simply much cheaper options now, in all honesty Rival turf filled a void which simply no longer exists . If your looking for a copy of it a Pal cart will cost you around £8 to £12 online including postage. The game does have some much improved sequels but they are costly. Ok so I originally wrote this review a few years back and it has taken me until now to edit this review and to record a YouTube video, well since then there has been a bit of a cool update to this story. A company called Retro-Bit Europe have released a boxed Snes Cartridge called the Jaleco Brawler’s Pack which is official and contains 4 complete SNES games on one cartridge, these games are Rival Turf and its sequels Brawl Brothers and  Rushing Beat Shura as well as Tuff E Nuff which is a one on one style beat em up. On Amazon this collection can be gotten for £22 new currently and that is certainly the way I would recomend SNES owners to try this game as I feel thats a much better investment as the sequels can cost quiet a lot to track down.