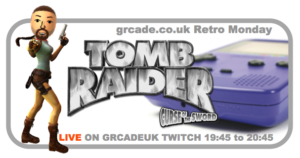 Another week in which I get a game I know nothing about,  Tomb Raider: Curse of the Sword was released in 2001 on the Game Boy Color and was Developed by Core Design and published by Eidos, it’s also a sequel to Tomb Raider on the GBC.

Where do I begin with this? It’s hard to say because I disliked pretty much everything about it. Let’s talk visuals. The visuals in the game to me are pretty bland when it comes to the backgrounds and the like, the sprites while not the prettiest have great animations, Lara is really fluid and the animation of her hitting a wall and bouncing off and hitting the floor is great – but there wasn’t much to look at elsewhere.

The sound wasn’t much better. It starts off with this pretty good tune in the title sequence and then you have a cut scene with some more appropriate music, then you get to the level and no music, you just get sound effects of Lara running and that’s about it, and the sound effects of her running aren’t great either.

The gameplay to me was pretty boring, it’s a side-scrolling platformer where the controls are unbelievably awkward. You press up to jump and half the time you’ll jump forward instead of straight up. which can lead to you jumping off a platform, or you’ll run to jump a gap press up and boom, you didn’t jump and just fell to your death. What’s also odd is if you jump forward, even if you don’t press up again, but hold forward you keep hopping forward like some deranged frog. Honestly, I looked at reviews and see it got 7.5s and 9s and so on back in the day. Was gaming that bad back then that trash like this got highly rated? Or is it the case the game improves in the later stages? After what I played I’m not willing to find out if the latter is the case. A game needs to start off at least good/interesting to keep someone entertained to get to the best parts and sadly Tomb Rader: Curse of the Sword completely failed to do so.