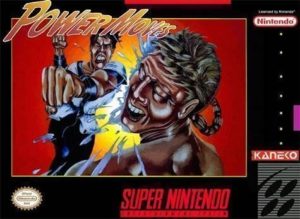 Rule number one if you are going to try to make money by copying another game is to make sure you get a copy of the game you’re trying to copy and play the living daylights out of it.

Sit and analyse it. Try to see why it is so popular, and what your game needs to contain in order to attract the same amount of fans.

Why am I talking about this? Well basically because the game I have been playing is Power Moves, one of many of the games which came in the wake of Street Fighter II. When playing this game though I am reminded far more of the original (less famous) Street Fighter.

Power Moves – known in Japan as Power Athlete – (at least on the SNES, the Mega Drive version was renamed Deadly Moves) came out in 1992 and was developed by System Vision and published by Kaneko. It came out towards the end of 1992, many months after Street Fighter II, which I add because I want everyone to know this key fact.

The one player mode on this game is basically the same as Street Fighter. You get no choice of character you are simply made to play as one guy, in this case an almost Americanised looking Ryu clone with the name Joe. Truly there can be no mightier martial arts name than Joe, maybe his last name is Bloggs? But I digress. You are Joe, you do an energy move from your hands out in a straight line (we all know it as a fireball, just like the original Street Fighter), though the motion to do this is over-complex and therefore a pain. There are only three buttons – one punch, one kick and one jump – if you are very close then the kick button also doubles as a throw. I did somehow manage to get Joe to do another move, it was sort of a two-handed dragon punch which went much more diagonal than the ones we are used to.

Even on the middle difficulty the game comes is hard, and this is where the game has a little flair of originality. You don’t start with a full life bar, you start with a bit and by beating opponents this bar grows in size as do other bars you can see which represent your strength, speed and defence. You can choose who you want to fight next out of all of the enemy characters but some outclass you by having much longer bars. If you wanted to you could fight and beat an opponent multiple times in order to fill your bars and make your future fights against other enemies easier. You have a set amount of continues, which I think increase as you win fights or at least it seemed that way to me. At first I found the game so hard that I was almost going to give in, but then it just seemed to click. I got into the rhythm of the game and managed to beat opponent after opponent with very little trouble and this was without repeating fights in order to level up my bars. I only repeated one fight and that was just to see if it would let me. It only took me about 20 minutes though and once you’ve finished the game nothing changes you can still only be Joe in single player and apart from going into the options and upping the difficulty there is no reason to ever play the single player mode ever again, which is a big disadvantage when you compare this game to other games from this period in time.

In the two player mode you can be Joe and any of enemies except for the final boss, which is a bit of a shame as Mega Drive owners got the chance to play as him in their version of the game.

The characters in this game are (I haven’t listed Joe as I have already talked about him):

To be honest I cant see anyone bothering much with the two player on this. Not when you could play all manner of other fighting games, it’s not like we were lacking them back in the day, nor are we now really.

I would give this game four out of 10, its not an awful game but there are so many other better beat ’em ups out there. If you want to try this game I think you will need to import it. I haven’t seen an PAL copy but I am sure the Mega Drive one came out over here. I have seen lots of US imports for about £10 for the cart, and a few Japanese ones for £5. I was lucky and got my copy recently for £3.50 with free postage. Personally, I would invest you money elsewhere.