No TV series makes it past 20 series without someone realising it has the potential to sell a lot of other stuff by association.

The Simpsons was a largely adult-humoured comedy which children seemed to become obsessed with. So it was no surprise when the Bart vs. this and that games started to pour on to the NES. It didn’t even take the programme being around long for it to begin to happen. Bart was the main Simpsons character who was focused on when it came to games, so when a Krusty the Clown game was announced it almost took me by surprise. I can’t remember who had it first, but it seemed to be one of those games that almost all of the SNES owning guys at school got hold of.

What neither I nor the rest of the guys knew back then was that Krusty’s Super Fun House originally was not a Simpsons title at all, it was a game called Rat Trap. So whatever you think of the game you cant really call it a rushed cash-in on The Simpsons’ name, as the game was completed in its original form long before The Simpsons was attached to it. Acclaim, bought the finished game and decided to make a large return on it they would make alterations and turn it into a Simpsons vehicle. This made it the first Simpsons game not to feature Bart as the central character (although he does appear in it).

Rat Trap was developed as an Amiga game, and non-Simpsons versions of the ROM/disk image can be found for those interested in that kind of thing. Whether the game ever saw any kind of limited release in its original Rat Trap form, I have no idea, maybe it was and that’s how its ROMs ended up online, or maybe it was leaked by someone close to it. What was originally intended to be an Amiga game ended up having the Simpson’s license added and then ended up being released for the Amiga, DOS, Game Boy, Game Gear, Master System. SNES and Sega Mega Drive. From a business stand point I cant say I blame them, the more machines it is on the higher sales potential it has, which is something a lot of companies seem to have forgotten nowadays while they try to court exclusivity deals and pay cheques from various system owners.

The main goal of the game is to slaughter the rats by leading them to what I can best describe as semi-automated killing machines. Back then no one saw anything wrong with the murder of cartoon rats. I can only imagine what would be said if something like this came out now – PETA would have a field day. After all they already think that in order to become raccoon Mario, Mario takes his super knife and slices his way into a live racoon pulling its guts out with his teeth, which until they put the idea in to my head I merely thought it was magic, or that he slipped on a raccoon onesie and gained new powers due to mental illness (wouldn’t you be ill if you saw bullets with talking faces and dinosaurs who could eat things twice their size?). 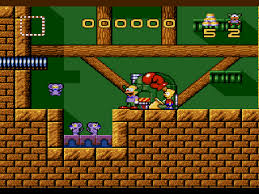 To get the rats into the killing machine, Krusty needs to do a bit of puzzling, lifting up blocks and putting them in the right place for example. The graphics and the way this works has a bit of a Lemmings feel to it, which is no bad thing in my opinion (I just wish it was a little more like Lemmings).

Krusty is also armed with a small supply of weapons in the form of custard pies or balls. These have no real use when it comes to the rats but there are other characters around such as snakes which will attack Krusty and he can use these to defeat them. Strangely, there are massive parts of levels the rats never even go near, and in fact they couldn’t even reach if you messed up, but you can explore these areas and kill the enemies there, for points I guess. To finish a level you need to kill all of the rats and then return to the starting door to hear a little jingle and then move on to the next one. Sometimes the level will be made so you can’t just go back and you need to go forward and then around to get back, beating the enemies in your way to get there.

The graphics are bright and functional, if not amazing. The Krusty sprite looks good but the fact he is constantly smiling seems a little strange given the Krusty we now know and love. I guess this game came out quite early in The Simpsons’ run so Krusty was a little more child-friendly back then, and he hadn’t been fully characterised as the alcoholic, only in it for the money scumbag we all know and love.

The game is functional and at times fun, but I really believe no one would even bother to play or look for it now if it was not for the attached Simpsons license. I score this game five out of 10. It is just plain average. So average that at times it hurts. I am sure I enjoyed this more when I was younger. I rate this game much higher as an example of good business decisions than as a game.

I paid £3 for my NTSC cart of this game not long ago, but looking online £8 seems to be about the going rate for it in either PAL or NTSC. So for once I am actually showing you a game you can get without needing either a import machine or a wad of cash.