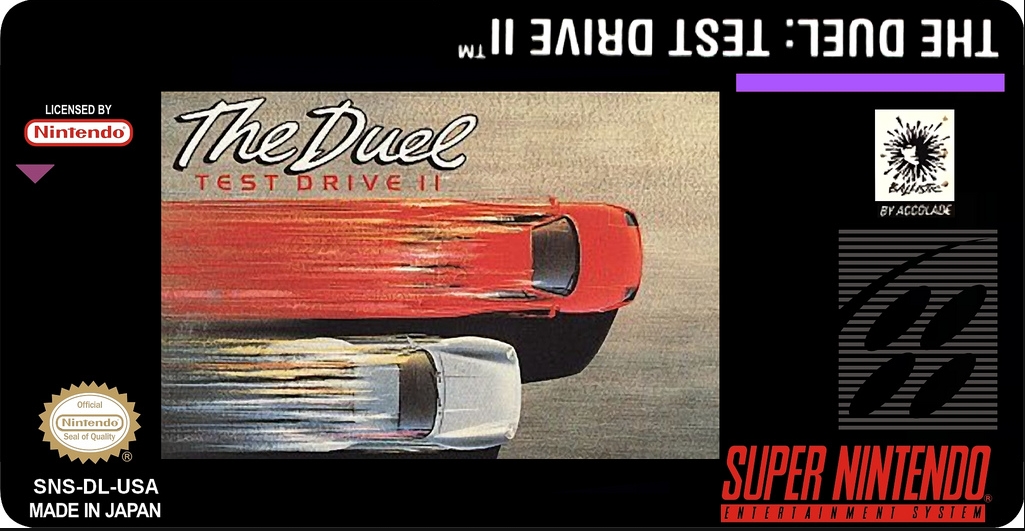 New day, new game, I figured I would do something I haven’t done so far; I would review a driving game. I picked the game via a simple method; it was the first driving game I pulled out of my box of SNES carts.

The Duel: Test Drive II is a racing game developed by Distinctive Software and published by Accolade, a name I am sure most of you have heard of. It came out between 1989 and 1992 on the Amiga, Amstrad CPC, Apple IIGS, Apple Macintosh, Atari ST, Commodore 64, MS-DOS, MSX, SNES, Sega Mega Drive and ZX Spectrum. So just about everything you can think of at the time but I will be focusing on my experiences of the SNES version (which came out in 1992).

The presentation on the game strikes me as a little bare bones. There is very little to choose from and very little you can alter. It gives you the impression this is very shallow for a game people were paying £40 for back in the day. You start the game and you are given a choice of three cars. They are basically extremely popular sports cars from back in the day – a Lamborghini, a Porsche and a Ferrari (I can’t remember the exact models). Your choice of difficulty determines whether the car will use automatic or manual transmission. You get to choose one of four courses to race on, each labeled with an indicator of its level of challenge. You then either pick one of the games three cars to race against or you pick a stopwatch to merely treat it like a time trial.

You control the car from an internal view, so you can see all of the dashboard and it is different depending on the car you pick. Once you start the game you race along a highway stopping for petrol when a big stop indicator tells you to. If you don’t stop for petrol you will run out of gas and lose a life, and if you hit another car you will also lose a life. Each level also has one or more police cars along the course who I assume try to either crash in to you or arrest you causing you to lose a life. I am not sure because in all honesty I was never caught by them, I  didn’t even seem to see them. If you’re going above the speed limit at a set point on the road then you will hear a siren, but every time this happened I just kept my finger on the gas until the noise disappeared.

I am going to cut straight to the chase with this game If I had been reviewing it back in 1992 then it might have scored better, but as it stands I think I need to give the game a three out of 10. Some people hold the SNES up as a golden era when everything was great, and in some genre’s this might be the case, but I don’t think semi-realistic racing simulations was one of them.

Don’t get me wrong, it is not awful to play – it looks decent enough and it controls well enough – but it commits a huge cardinal sin of gaming with the simple fact that it is just boring. There is no music, the graphics are functional and the choices of cars and tracks are just too limited for me to recommend it.

The game feels a bit more like some kind of tech demo. It feels like there are things there which you would want to see in a full game but the ideas just haven’t been pushed far enough. If I had paid full price for this on release I think I would have soon found myself very bored of it, especially if it was the case that I had the money to grab this game and then had to wait and save again for my next game. I guess that this was probably better if you were an Amiga, Atari ST, or other home computer user as it was a whole lot less cash on release on those formats. I am starting to think that the SNES is at its best when getting games designed specifically for it instead of various ports.

As for the price you might pay for this now, copies seem to be quiet thin on the ground. There is currently a boxed UK copy on Amazon at the time writing for £15, and I can’t see any others elsewhere to compare it with. I can’t remember what I paid for mine, it’s an NTSC cartridge only and I have had it since my childhood. I can’t really recommend anyone spend more than £5 on this game I am afraid. There are many better games out there both retro and modern especially in the racing category.