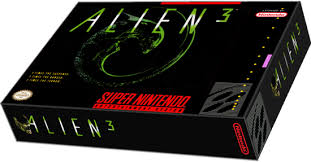 It is half-based on the film Alien 3. I have to say half-based because it’s set on the prison planet from the film and Ripley is shaved bald, but then there are a lot of differences between the game and the film. In the film there is one alien and no one has any weapons. In the game this is completely altered. Ripley, the main character, has all the guns from the previouis film in the franchise Aliens and there is a never ending amount of xenomorphs. I guess it is easy to see why they did this. After all, a game where you spend your whole time running away from one super powerful creature with nothing much to defend yourself sounds a lot harder to get right than a game where you spray lead at a never ending assortment of alien scum.

In fact it looks like it has taken until now – almost 21 years later – for someone to have a crack at a game which is based around the idea of being stalked by one single alien from the Aliens films. I am of course talking about Creative Assembly’s game Alien: Isolation, which delivers exactly that kind of experience and it has done a fantastic job of it. It also made DLC based on the original movie Alien, and maybe with its similar one alien killing people set-up it might one day make Alien 3 DLC. Maybe a game that would have followed the film Alien 3 more correctly and still be good and not cost a fortune in research and development just simply wasn’t possible back then – still, I digress.

Graphically, the game is pretty good for the time. Ripley’s sprite is large and for the most part it’s not bad at all. The clothes look right, the basic shape is right but maybe it’s just me but there is something almost alien about her neck and the lack of facial features makes her look a little like Voldemort of Harry Potter fame. There are lots of little cool touches though, like how her gun swings by her side as she’s climbing the monkey bars so I guess maybe I am being a little harsh. The backgrounds are multi-layered for that 3D style look, they are also very detailed. The backgrounds are overly used though with five or six repeated again and again. Add to that there are bits of scenery in the foreground that you can’t see through. Sometimes there are aliens behind these and this means that you need to either run the risk of being harmed or shoot just in case which wastes your sometimes limited ammo.

There is not a lot in the way of sounds but what is there is good. The gunfire sounds great and so do the screams of the aliens you kill. The game has pretty darn good presentation, a nice opening, I also have to tip my hat to the bits where you log into a computer. They do a pretty good job of making you feel like your chracter is actually using a real computer in the game’s universe and the game over failure screen is also suitably awesome.

What about the gameplay though? Well I find the game enjoyable in small bits but I definitely don’t think it’s a classic or anything. The controls are very good and everything works just as it should which you would think would make this a good game. But sadly there are other issues with the gamplay. I think one of the things the game is lacking is it needs a more detailed map you can easily bring up. Yes, there is a mini map radar thing which lets you know when something is approaching you, but this is more to help keep you from getting hit and doesn’t really help you get around easily. I think what the game really needs more than anything though is a bit more variety. Everything looks the same, you’re always killing the same things, mostly in places that look the same. This game is very time consuming, and can at times be very difficult. It’s easy to get lost and some of the missions seem more complex than they need to be. There are a few alien bosses here and there but they aren’t too hard. The problem is it all starts to feel a bit like a chore at times which is not how a game should feel. I think the maze like quality of the game, coupled with the mission structure, just didn’t quite work in total honesty. I think it would have been better to have strayed even further from the film and offered up something a little more arcade like, something a bit like Konami’s Aliens arcade machine which was primarily a side-scrolling shooter but also had third-person rail shooter parts. Yes, that game possibly soiled the source material even more by introducing blue zombies and other such things to the game but sometimes you just have to say to hell with the plot, let’s roll out the fun boys.

All in all Alien 3 is pretty much an average game so I feel I should give it five out of 10 and simply say it’s not really worth bothering with unless you’re a die hard SNES collector and want every cart you can get, or your a die hard fan of the Alien film series and all of its spin off media. If you’re more of a casual fan of the Aliens universe and you want a good fun retro Alien related game I recommend you get Aliens Trilogy on the PlayStation. It’s a first person Doom-style shooter but it’s brilliant, fun, fast and wrapped in movie sounds and neat touches.

If you do decide you need to own Alien 3 then there are plenty of PAL carts of it about online around the £8 to £10 range with boxed copies starting around the £15 mark. There are several complete copies of Alien Trilogy for PlayStation on eBay at the moment for around the £5 mark including postage. If you own a PlayStation I’d go for that instead for your Aliens retro fix. Oh and if you have a PlayStation 4 or Xbox One then seriously give Alien: Isolation a try, it’s an excellent game.