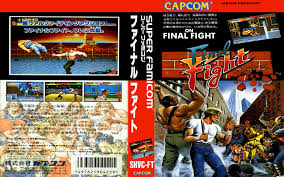 I try to keep games like this that everyone will know to a bear minimum or at least thin them out as much as I can, but I kind of felt that I needed to get Final Fight out of the way – and not in a bad way.

The game was important for a lot of reasons. The fact that it was on the SNES but not the Mega Drive was one of them, as this was part of the reasoning behind Sega coming up with the Streets of Rage franchise. The game touched and affected the whole of the market. I am going to try to talk about it but do my best not to retread the exact same ground everyone does (this will be hard with how much the game has been talked about).

Final Fight is a side-scrolling beat-’em-up produced by Capcom. Originally it was released as an arcade game in 1989. Final Fight was the seventh title Capcom made to work with its CPS-1 arcade system board. The CPS-1 worked a bit like the Neo Geo, you had a system board and other smaller boards could be mounted on top of this, and the large board was the guts of the arcade unit and the small board held the actual game. I actually own a CPS-1 board but the only game board I own for it is Pang! 3.

The game is set within the fictional Metro City. In the arcade game you get to pick one of three characters: Former pro wrestler-turned-mayor Mike Haggar, his daughter’s boyfriend Cody, and Cody’s friend Guy. The whole idea of the game is to take down the Mad Gear gang and rescue Haggar’s daughter Jessica.

The game originally began development as a sequel to the first Street Fighter arcade game but the genre was switched from a one-on-one fighting game to a scrolling beat ’em up and the title was changed following the success of Double Dragon. This is probably one of the main reasons that Final Fight characters have popped up in Street Fighter games.

When the SNES version was released it was in some ways limited. There was only Haggar and Cody – Guy had been dropped (although there was a version released in some territories called Final Fight Guy which removed Cody from the game and replaced him with Guy). There was also a level stripped out of the game and then there were some minor changes in connection to policies Nintendo had for games released on their machines. Female members of Mad Gear were altered to appear male as Nintendo had objections in regards to the ability to violently beat up women, even if they were busy trying to knife you to death. None of this broke the game or made a huge difference to how it played. I do think that with some effort they could have squeezed Guy in. I have seen games cheat to free up room by using the same legs or arms for characters before sometimes just colour swapped and I am sure there would have been a way to do something like this to free up a little room. The main thing that people tend to talk about is the fact that the game has no two-player mode, which I have to admit is a shame as this was one of the things that made the arcade machine so popular, the fact that you could go through the whole game with a buddy. It is not a game breaking deal though as long as you know about it in advance. The graphics are big, bright and impactful, the music is just as good. The only negatives there are can’t really be termed negatives with the game and more deficits from the arcade machine. 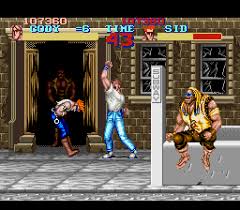 The game is a great scrolling beat em up to play on your own and even bearing this in mind I would have to give it eight out of 10. However I fully recognise that if you want to play with a buddy or have a friend around you would be better looking at one of its competitors or even one of its sequels (they are usually expensive though).

I have had my copy since I was a kid. I bought it before I even owned a SNES. It was September and I knew I was getting my SNES for Christmas, I already had a cheap converter and Final Fight came up for sale NTSC in my local games shop a place called Games World for £10. I used to get £5 a week pocket money and £2 a day lunch money. So I did what I think most game crazy school kids would do. I took an apple and a bottle of water to school everyday without my parents knowing and ate these for dinner while pocketing the money waiting for Saturday to come so I could buy Final Fight. Following this kind of logic I had a nice little collection by the time Christmas rolled around.

If you want to buy Final Fight PAL versions exist but whenever I see them they are crazy money. US NTSC versions crop up for around £15 for a cart. To be honest if you have a Wii U you can download Final Fight for £5.50 (the SNES version). Or if you have a PS3 or Xbox 360 you can get a perfect emulation of the arcade machine for about £6.50. It can be found under the title Final Fight: Double Impact, and for your cash you get both Final Fight and another Capcom game called Magic Sword (which was also ported to the SNES).