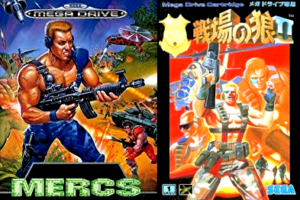 The game I am going to be talking about for my very first Mega Drive game in this series is Mercs, or to give it its original name Senjō no Ōkami II which translates as Wolf of the Battlefield II.

I played this game back when I was a kid and never for a second realised it was a sequel. In fact at the time I also didn’t realise that it had been an arcade game developed and published by Capcom in 1990 before it was on the Mega Drive. In fact it had been one of the games on Capcom’s Capcom Play System (CPS) arcade hardware. 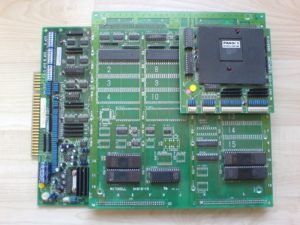 For those interested in the inside of arcade machines, the CPS was an interesting bit of kit. It was essentially a large arcade Jamma-compatible board with the games then stored on removable ROM cartridges/boards. You could then if you were an arcade operator buy a new small ROM cart with a different game on it and change this instead of having to buy a whole new large arcade board, it’s kind of like the Neo Geo MVS system SNK used – most famous for being the hardware that ran the original Street Fighter II. I actually own a CPS board but I only have one rom board for it and that is Pang! 3. (Capcom also went on to release an adapted console version of this board in Japan for home users, as well as two sequel boards for the arcades, named the CPS2 and CPS3.)

This game first came into my life when I got a cheap Japanese copy of it from my local indie game store Gamesworld. I used to buy a lot of import games from here because when they were new and not out over here they were quite expensive. But as soon as the game was out over here the Japanese version would drop to around £5 and I could usually either buy this with my £5 a week pocket money, or I could just not eat at school and save up my dinner money to buy games, something I frequently did. I kind of wish I still owned that Japanese copy, but at least I still have a copy of it. It was years later that I realised it had been in the arcades and that it was in fact the sequel to the 1985 Commando – a game which I actually had played in the arcades as well as a part of it on my Sinclair ZX Spectrum home computer.

I am always moaning like heck that various games deserve more sequels and this one actually got one in 2008 called Wolf of the Battlefield: Commando 3, which was a downloadable game for the Xbox 360 and Playstation 3. I didn’t actually play this till I got the Capcom Digital Collection, which was a compilation of digitally-released Capcom games which had appeared on the Xbox 360. I am not reviewing Commando 3 but I will say it’s a bit of a lesser sequel in my opinion, but still not too bad.

So what we have here is the second part of a trilogy right? Well the answer to that would be yes and no, I guess. You see Mercs on the Mega Drive wasn’t actually made by Capcom at all. It was instead converted by Sega and they actually made quite a few changes. Now most people would expect me to say what happened was Sega removed a whole bunch of stuff and made a weaker, worse version that their console could more easily pull off, right? Well there is a tiny bit of truth to this, in that the arcade game was a one to three player third-person shooter game, and this game is a one player game. I know people are instantly going to think: “Oh dear, removing the multiplayer sucks, just look at how much it affected games like Final Fight on the SNES, but really I think Sega did more than enough to cover this. Sure, a two-player mode would have been nice but there is a lot to recommend about this game.

For a start there are two modes of play, one is called arcade and the other is called original. Arcade is basically a one-player conversion of the actual arcade machine. It puts you in the shoes of one particular soldier, who can collect various different weapons throughout the different levels. It’s good to see the arcade game on offer here even if it is restricted to one-player mode. A lot of games would have given you this and then just shrugged off the fact that they’d cut out the multiplayer and gone: “Well it was the best we could do given the hardware”.

The way the arcade mode plays you basically take your guy and travel vertically up the screen shooting enemy soldiers, vehicles and turrets while trying to take as little damage as possible. At the end of each level there is a boss, for example at the end of the first level this is a fighter jet which shoots its machine guns down at the cliff you find yourself standing on while you try to dodge the bullets and take it out. The gameplay is deliciously old school. It’s simple to pick up but with room to master. Basically you move with the D-pad and shoot with one button and then have a button which uses what is called the ‘mega-crash’. This is your screen clearing/heavy damage bomb button, which tends to be good either for when you’re surrounded and in danger, or to deal heavy damage to bosses. The gameplay is really simple, you basically shoot everything – enemies, item boxes to open them, and trees or gates or other things which hinder your progress – all while trying to get shot as infrequently as possible. During certain levels you will be able to get into certain vehicles. These include tanks, boats and jeeps and as well as providing a little extra armour to you they’re also great fun and help to break things up a bit, if you enjoy arcade style games then you’re bound to get a fair bit of fun from this.

The original mode, is sort of a rearranged mode with a few neat touches. You start off with one soldier, you only have one life and your weapon starts off pretty darn pathetic. At first you feel seriously underpowered to take on what the game will throw at you and this is much harder than the arcade mode. In fact at the end of the first level you basically have to defeat the arcade level one boss and take so little damage that you will have enough life to make your way into the second level. I would strongly recommend starting with the arcade mode and playing this as sort of game-plus kind of thing.

In this mode you wont find any extra lives but as you progress you will find fellow soldiers/mercs. These mercs will have different guns, basically they are the guns you can collect in the arcade mode but here each gun is tied to a different guy and once you have more than one you can tactically switch between them, thereby using the right guy for the right situation. As you gain more items the weapons you have will become a lot more powerful but you will need to decide which of your characters needs to pick up what is in front of you, be it food or power-up icons. These extra guys essentially become your extra lives, but if you only concentrate on powering up one of them then when he dies well the others are basically screwed. You will collect medals on your journey and these become a form of currency you can use in shops in order to power your guys up. This added mode is a lot tougher to complete and I feel it adds a heck of a lot more to this title, in fact when I have gotten the arcade version of Mercs on various compilation collections I have often found myself feeling like i’d prefer to have the Mega Drive version which is something you seldom hear said about a conversion. It’s a shame that there has never been an enhanced version of Mercs for later systems offering all of the benefits of both the arcade (multiplayer) and Mega Drive versions.

For a pretty early Mega Drive game this game has really good graphics. It’s the kind of thing that people would have wrongly called arcade perfect back in the day. They are in fact not identical to the arcade’s graphics but they are quite frankly close enough for me to not care at all. Everything looks correct and runs smoothly and when you throw in what I find to be a brilliant action-packed soundtrack it all just fits and offers up what I would personally consider an amazing experience. I have actually found myself humming bits from this game long after I have finished playing it which for me is always a sign of a good video game soundtrack. As I try my Mega Drive games on both a 50hz and 60hz console I want to briefly touch on that in my reviews, as far as Mercs goes it actually doesn’t feel much different when played on either set up, although if you do play the game on a Japanese console you do get the alternative title and the story will be shown in Japanese.

OK, I suppose it is time to give Mercs a score. I happily give this game nine out of 10. It’s great fun and as well as bringing the arcade game home it offers a mode with a little more challenge which helps it last longer as a home experience, I guess it just the lack of multiplayer which makes it lose out on the perfect 10 out of 10 score for me. But I’d still rather have this version than its arcade counterpart.

If you want to buy this game how much is it likely to cost you? Well PAL carts seem to start around the £7 mark with boxed copies starting at roughly double that, both of which I think are good prices for this game. Obviously if you want to give it a bash I would advice you to look around and decide if you want a loose cart or a complete copy and then go for the best one you can find bearing condition and price in mind.